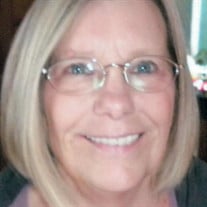 Darlene Hardesty, 68, of Fairmont, West Virginia passed away peacefully at home on Sunday, January 27, 2019, after a long and hard-fought battle with cancer. Darlene was born in Fairmont on April 30, 1950, to Winona Pearl Swiger and Francis Swiger. She graduated from East Fairmont High School in 1968. Soon after, she relocated to Morgantown with her then husband and two children and would spend the next 10 years as a stay-at-home mom, a role she cherished. Beginning in the early 1980’s and for the next 30 years, she began a career in childcare, first out of her home in Morgantown then later with various daycare facilities in the Fairmont area. Darlene is survived and will be deeply missed by her husband, Tom Hardesty, of Fairmont; a son, Rob Mullens (Jane), of Eugene, OR; a daughter, Lisa Jennings (Josh), of Richmond, VA; two step-daughters, Brenda Hensley (Frank), of Fairview and Bobbie Hardesty (Mike Anderson), of Fairmont; step-son, Tom Jay Hardesty, of Fairmont; grandchildren, Cooper and Tanner Mullens, of Eugene, OR; step-grandchildren, John Spencer, of Fairview, Chase (Jenn) Spencer, of Windsor Mill, MD, and Diana Hardesty, of Fairview; two sisters, Rayenna Smallwood, of Pittsburgh, PA, Wendy Ferrell (Allen Dale), of Fairmont; brother, Randy Nedley (Neva), of Fairmont, and many nieces and nephews. She is also survived by her two loyal and loving family pets, Chico and Diesel. She was preceded in death by her mother and step-father, Winona and Clarence Morris; a sister, Eileen Stout; and brother, David Lane. Many thanks to Dr. William McBee and the entire staff at the Zelda Weiss Cancer Center who for the last two years provided excellent care. In lieu of flowers, the family requests that donations be made to the Zelda Weiss Cancer Center at Mon Health Medical Center Foundation 1200 J.D. Anderson Drive, Morgantown, WV 26505 or at https://www.mongeneral.com/main/make-a-gift-online. In keeping with Darlene’s wishes, she will be cremated. Family and friends are welcome to call at Carpenter and Ford Funeral Home, 209 Merchant Street, Fairmont, on Friday, February 01, 2019 from 3 p.m. – 4 p.m., with a memorial service starting at 4:00 p.m. at the funeral home with Pastor Scott King officiating.

Darlene Hardesty, 68, of Fairmont, West Virginia passed away peacefully at home on Sunday, January 27, 2019, after a long and hard-fought battle with cancer. Darlene was born in Fairmont on April 30, 1950, to Winona Pearl Swiger and Francis... View Obituary & Service Information

The family of Winona Darlene Hardesty created this Life Tributes page to make it easy to share your memories.