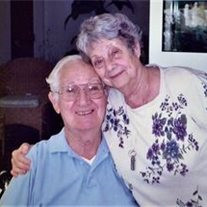 Wilma G. Jenkins Starkey, 95, of Fairmont, formerly of Morgantown, has reunited with the love of her life. She passed peacefully surrounded by family members at her bedside at the Fairmont Health and Rehabilitation Center (formerly Arbor's) facility on Sunday, March 18, 2018. She was born in Morgantown on October 14, 1922, the daughter of the late Ray L. and Clemenia V. (Maust) Jenkins of Morgantown. Wilma was preceded in death by her husband and soul-mate, Charles Virgil "Virg" Starkey. She was also preceded in death by her brother, David Edward Jenkins. Mrs. Starkey was the loving and devoted wife of Virgil for 58 years prior to his death in September 2004. She was the mother of Mrs. Judith "Judy" L. Foster, wife of George Foster, of Port Charlotte, FL formerly of Fairmont, and Joyce E. Silk, wife of Gerald "Jer" Silk of Greensburg, Pa. Known as "Nana" to her family and friends, she is survived by her granddaughter Brandy L. Hutchinson, wife of Jacob "Jake" of Fairmont; and grandson Charles E. "Chad" Silk and his wife Connie, of Greensburg, Pa. Also surviving and preserving her memory are six great-grandchildren: Gracelyn "Gracie" Hope Kershner, Abigail "Abby" Garnet Buretz and Hannah Hutchinson of Fairmont, Cole Thomas Silk, Cali Rae Silk, and Corey Kramer of Greensburg, Pa. Also surviving are grandsons and their families Jerry Silk of Virginia, Danny Silk of Virginia, and Jeff Silk of Kansas. Born and raised in Morgantown, Wilma attended Monongalia County Schools and graduated from Morgantown High School in 1940. She worked at WVU in the School of Pharmacy from 1940 -1946 as secretary to the Dean. Starting in 1963, she was the Administrative Assistant to various Presidents of WVU until retiring in 1976. Wilma was a charter member of the Morgantown Chapter of the National Secretaries Association, member of the Morgantown Business and Professional Women's Club. While a resident of Morgantown, she was active in numerous civic organizations. One of her proudest memberships was belonging to and becoming President of the Monongalia County Recreation Commission, being appointed by the Morgantown City Council to be their representative. After moving to Fairmont in 1980, "Nana" enjoyed hunting and fishing with her devoted and loving husband "Virg". She also enjoyed gardening and reading until her sight became impaired. In addition, she enjoyed listening to various types of music and especially loved and appreciated the devotion of her canine companion and friend, "Ditto." Wilma appreciated the kindness and thoughtfulness of her neighbors and friends in Fairmont and thought often of her friends in Morgantown. She was very proud of her association with the Fairmont Rotary Club through her family and becoming a Paul Harris Fellow. She was a member of the Meadowdale United Methodist Church H & H Chapel and the United Methodist Women's group. The family would especially like to thank Connie Rutheford, her former caregiver, for not only her official duties, via the Marion County Senior Center program, but also for her kindness and love to the entire family for the past several years. Bobbie Doerfler also deserves special recognition for endless time spent with mother and transporting her to doctors' visits. Esther Kave, mother's roommate and special friend made her last two and one-half years very enjoyable. The family also would like to thank the caregivers at the Genesis Pierpont facility, and since July 2015, the staff of Fairmont Health and Rehabilitation Center, as well as the West Virginia Caring- Hospice for their assistance during the transition process for our Mother, Grandmother, and Great-Grandmother from home care to skilled nursing care. Following Wilma's wishes, friends and family may call at Carpenter and Ford Funeral Home, 209 Merchant St., Fairmont, from 6 pm to 8:30 pm Tuesday and on Wednesday from 11am to 1pm. The funeral will be held at the funeral home at 1:00 p.m. on Wednesday, March 21st with Reverend D.D. Meighen officiating. At Wilma's request, there will be no graveside service. Interment will be at the Beverly Hills Memorial Gardens in Morgantown. In lieu of flowers, Wilma's wishes were for donations to Pet Helpers, Inc. 726 East Park Ave. PMB 311, Fairmont, WV 26554; The Marion County Senior Center 105 Maplewood Dr., Fairmont, WV 26554; or the Rotary Foundation via the Fairmont Rotary Club P O Box 12, Fairmont, WV 26554.

Wilma G. Jenkins Starkey, 95, of Fairmont, formerly of Morgantown, has reunited with the love of her life. She passed peacefully surrounded by family members at her bedside at the Fairmont Health and Rehabilitation Center (formerly Arbor's)... View Obituary & Service Information

The family of Wilma G. Starkey created this Life Tributes page to make it easy to share your memories.