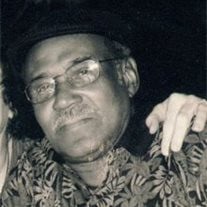 Willie D. May, Sr. Willie Drew May, Sr., 83, of Fairmont died on Tuesday, November 10, 2009 at The Heritage in Bridgeport. He was born in Bessemer, Alabama on February 22, 1926 a son of the late Jettie and Johnnie Brown May. Willie proudly served in the United States Army during World War II as a member of the 92nd Division. He was a member of the Buffalo Soldiers. He achieved the rank of Staff Sargent with the 217th Engineer Dump Truck Company. Following his military service, he held various position and business ventures, including owner and operator of May & Son Trucking with his son Willie Jr. In Cleveland, Ohio. He was a member of the American Legion Post 17. Mr. May was extremely proud to have served his country in the United States Military. He will be sadly missed by his large loving family. He is survived by his loving wife Elizabeth “Betsy” Morrison May; six sons Willie D. May, Jr. and his wife Gail of Cleveland, Ohio, Tamayo M. May of Oregon, Anthony C. May and his wife Glenda of Hudson, Ohio, Thomas R. May of Cleveland, Ohio, Terry L. May and his wife Rose of Ridgecrest, California, and David A. May and his wife Angela of Dallas, Georgia; four daughters Mary Shaw and her husband Clifford of Cleveland, Ohio, Sherry D. Skelly and her husband Frank of Wadsworth, Ohio, Tracy A. May of Medina, Ohio and April L. Ayers of Cleveland, Ohio; one brother William S. Mays and his wife Olive of Douglasville, Georgia; twenty-six grandchildren, 19 great grandchildren, 3 great great grandchildren, two sisters-in-law Barbara J. Russell and her husband Bill of Fairmont and Kay Morrison of Winter Haven, Florida; one brother-in-law David M. Morrison and his wife Sharon of Berkeley Springs; and numerous nieces, nephews and cousins. In addition to his parents he was preceded in death by two brothers John D. May and Jimmie L. Mays; and five sisters Louise Green, Jettilyn Stratton, Margarette Harrison, Frances McCord, and Betty Taylor. Friends may call at the Carpenter and Ford Funeral Home, 209 Merchant Street on Friday, from 5-8 p.m. Funeral services will be held at the E F Boyd and Sons Funeral Home in Cleveland, Ohio on Saturday, November 14. 2009. Interment services will be held on Sunday, November 15, 2009 at Grandview Memorial Gardens in Fairmont. Full military rites will be conducted by the local Marion County Veterans Council Honor Guard. Condolences may be sent to the family at www.carpenterandford.com In lieu of flowers donations may be made to a veteran’s organization of choice.

Willie D. May, Sr. Willie Drew May, Sr., 83, of Fairmont died on Tuesday, November 10, 2009 at The Heritage in Bridgeport. He was born in Bessemer, Alabama on February 22, 1926 a son of the late Jettie and Johnnie Brown May. Willie proudly... View Obituary & Service Information

The family of Mr. Willie Drew May, Sr. created this Life Tributes page to make it easy to share your memories.