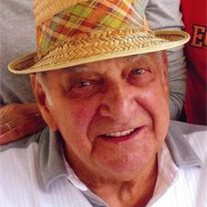 William “Bill” Joseph Sauro, 82 , of Fairmont passed away on Wednesday, September 30, 2009 at Monongalia General Hospital in Morgantown. He was born on January 9, 1927 in Fairmont a son of the late Daniel and Carmella Sauro. Mr. Sauro was a United States Army Veteran, also serving in the Merchant Marines and Navy. He proudly served our country during World War II and the Korean War. William was the co-owner of Sauro’s Dry Cleaners for 48 years. He loved spending time with family and friends. After his retirement, he was a fan of all sports and enjoyed spending time gardening, cooking and taking care of God’s creatures. He was well known by friends and family for his one of a kind sense of humor and his contagious laughter. William was Catholic by faith. He was also a lifetime member of the VFW Post #629 on Fairmont Avenue and a member of the Elks Lodge #294 of Fairmont. He is survived by his loving wife of 51 years Janice L. Corrothers Sauro; two daughters Rebecca (Becky) Bonette and her husband Jerry and Brenda Sauro-Cress and her husband Harold Jr. of Fairmont; his sisters Helen Perella and her husband Orfeo of Fairmont; Rosalee Drazba and her husband Randy of Marion, Ohio, and Deanna Gump and her husband Orval of Hilton, New York; his brothers Vete Sauro of Tacoma, Washington, Bud Sauro and his wife Mary of Bruceton Mills, Andy Lakatos and his wife Virginia of Morgantown; his two step grandchildren Richie and Ariel Cress of Fairmont and several nieces and nephews. In addition to his parents, Bill was preceded in death by his stepfather Joe (Papa Joe) Sauro; his brothers Anthony (Tony) Sauro, James (Jimmy) Sauro, Fred Sauro, and Pete Sauro; his sisters Jenny Pellegrin, Mary Bartlet, Angie Orr and niece Denise Perella. Friends and family may call at Carpenter and Ford Funeral Home, 209 Merchant Street, Fairmont on Sunday from 3:00pm to 5:00pm and from 6:00pm to 8:00pm and on Monday from 9:00am to 10:00am. Services will be held at 10:00am at the funeral home on Monday, October 5, 2009 with Father Richard Ulam, OSB officiating. Interment services will immediately follow at the West Virginia National Cemetery. Full military rites will be conducted by the Marion County Veterans Council Honor Guard and the West Virginia National Honor Guard, Camp Dawson.

William &#8220;Bill&#8221; Joseph Sauro, 82 , of Fairmont passed away on Wednesday, September 30, 2009 at Monongalia General Hospital in Morgantown. He was born on January 9, 1927 in Fairmont a son of the late Daniel and Carmella Sauro. Mr.... View Obituary & Service Information

The family of William Joseph Sauro created this Life Tributes page to make it easy to share your memories.