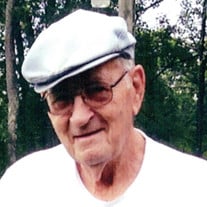 William “Bill” W. Rogers, 88, of Fairmont, died peacefully in his home on Monday, September 17, 2018 overlooking the West Virginia hillside and the changing trees outside his bedroom window. He is survived by his loving wife of 67 years, Patricia “Patty” Rogers; his son, Billy “Bub”; his daughter Sheila and son-in-law Timothy Pizatella of Fairmont, WV; his grandchildren Jason Pizatella of Charleston, WV; Ashley and grandson-in-law David Dickey and their son Maddox of Pittsburgh, PA; Matthew and granddaughter-in-law Christina Pizatella and their children Leah & William of Mt. Morris, PA. He also leaves sister-in-law Viola Rogers and brother-in-law JR Harsh, nieces and nephews and many close friends. Bill was preceded in death by sister Marjorie and her husband Pete Gordy as well as sister Doris Harsh and brother Ray Rogers. Born and raised in Fairmont, the son of Worley and Virgie (Lake) Rogers, he attended East Fairmont High School before serving in the Army for two years. Upon the birth of his son, he began his 40-year career as a roofer. During that career, he was co-owner of Rogers and Imes Roofing with colleague and longtime friend Kenny Imes, before solely owning Rogers Roofing. Bill was an avid hunter, a sport he enjoyed with his father and uncles. For many years, he owned a campground site at Big Bear Lake in Preston County where he spent summers teaching his grandkids to love the outdoors, building campfires, driving golf carts (probably too fast), and riding bikes until the sun went down. He loved sports, especially the West Virginia Mountaineers. But, what he loved most of all was watching his grandkids grow up on the baseball and softball field. He traveled near and far to watch every game, always finding a spot for his lawn chair beneath a large shade tree in the outfield. Bill was one of the hardest working men one would meet and he made it known that “his way was (often) the best way” when it came to mowing his grass or washing and waxing his truck, tasks he enjoyed doing as long as he was physically able. He took pride in the care of his home and the love of his family and was as generous of a man as he was tough. Bill Rogers lived his life to the fullest and leaves behind a family that loves him, will greatly miss him and will surely keep his memory alive in the stories they will share. Family and friends are welcome to call at Carpenter and Ford Funeral Home, 209 Merchant Street, Fairmont, on Wednesday, September 19, 2018 from 11am to 1pm, with the funeral service starting at 1:00 p.m. at the funeral home, with Reverend Randy Vincent officiating. Interment will follow at Mt. Zion Cemetery, with Full Military Honors provided by the Marion County Veteran’s Council Honor Guard and the United States Army Reserves at Camp Dawson. In lieu of flowers, the family requests that donations be made to the Marion County Humane Society, PO Box 905, Fairmont, WV 26554.

William &#8220;Bill&#8221; W. Rogers, 88, of Fairmont, died peacefully in his home on Monday, September 17, 2018 overlooking the West Virginia hillside and the changing trees outside his bedroom window. He is survived by his loving wife of... View Obituary & Service Information

The family of William Worley Rogers created this Life Tributes page to make it easy to share your memories.