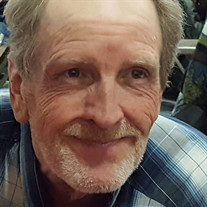 William George Prickett III, 62, of Grafton, passed away on Thursday, January 03, 2019 in Cumberland, Maryland. He was born on July 22, 1956 in Fairmont, a son of Margaret (Richards) Prickett and the late William George Prickett II. William graduated form Fairmont Senior High School and attended Fairmont State; he had currently worked as a Lead Driver for Mountain State Auto Auction. He will be remembered for his deep love of family, friends, neighbors, and fishing, as well as being a fan of the WVU Mountaineers and the Dallas Cowboys. William is survived by his devoted wife of 23 years, Donna (Loudin) Prickett. In addition to his mother, he is also survived by brother, Hayward “Rick” Prickett, of Grafton; step-sons, John Hall, of Grafton and Robert Hall, of Worthington; step-daughter, Virginia Hall, of Monongah; step-grandchildren, Kasey Higgins, of Fairmont and Shyla Allen, of Worthington; step-great-granddaughter, Lakelynn Scritchfield, of Fairmont; and sister-in-law, Ellen Lansbury and her husband, Vick, of Texas. In addition to his father, he was preceded in death by step-grandson, Ronald Higgins; and grandparents: Erwin R. Prickett, Armina Rhodeheaver, Mildred Marks, and Hayward Richards. Family and friends are welcome to call at Carpenter and Ford Funeral Home, 209 Merchant Street, Fairmont, on Thursday, January 10, 2019 from 10 a.m. – 1 p.m., with services starting at 1:00 p.m. at the funeral home with Pastor Roy Weese officiating. In keeping with the family’s wishes, William will be cremated following the service. In lieu of flowers, the family requests that donations be made to Carpenter and Ford Funeral Home.

The family of William George Prickett III created this Life Tributes page to make it easy to share your memories.

William George Prickett III, 62, of Grafton, passed away on Thursday,...