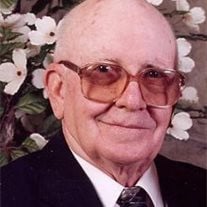 William Prickett, II William George Prickett, II, 81, of Grafton, passed away on Monday September 20, 2010 at the Louis A. Johnson VA Medical Center in Clarksburg, WV. He was born in Marion County on March 7, 1929, a son of the late Irwin Prickett Sr. and Arminnia Rodeheaver Prickett. William was a loving husband and father. He was a veteran of the United States Navy, serving his country during the Korean War. He was an engineer, retiring from FMC as a Draftsman. He was a 40 year member of the Elks Lodge 294, a lifetime member of the NRA and also the American Legion. He was a member of the White Day Golf Course and the Methodist Temple. He also attended the Everlasting Covenant Church. He graduated from Fairmont Senior High School. He would start his day off every morning by getting a newspaper from WalMart, open up at DJ’s Diner in Pleasant Valley, then visiting more friends at McDonalds and Hardees. He was a big WVU Mountaineer and Pittsburgh Steelers fan. He enjoyed hunting, fishing, and playing golf. He loved doing arts and crafts and giving the rocking chairs he crafted to children everywhere. A decedent of Pricketts Fort, he remembered going to his grandparents home at Pricketts Fort. William is survived by his loving wife, Margaret Richards Prickett; two sons, Hayward “Rick” Prickett and William George Prickett III and his wife Donna all of Grafton; and also three step grandchildren, John Hall, Genny Hall and Robert Lee Hall. In addition to his parents, he was preceded in death by a brother, Irwin Prickett, Jr and his wife Mary Frances and a daughter in law, Shellene Prickett. Family and friends may call at the Carpenter and Ford Funeral Home on Thursday from 1:00 pm to 4:00 pm and 6:00 pm to 8:00 pm. Funeral services will be held on Friday September 24, 2010 at 9:30 am at the funeral home with Pastor James Saunders officiating. Interment will follow at the WV National Cemetery in Grafton where full military rites will be conducted by the Marion County Veterans Honor Guard. Online condolences may be sent to the family at www.carpenterandford.com

William Prickett, II William George Prickett, II, 81, of Grafton, passed away on Monday September 20, 2010 at the Louis A. Johnson VA Medical Center in Clarksburg, WV. He was born in Marion County on March 7, 1929, a son of the late Irwin... View Obituary & Service Information

The family of William George Prickett II created this Life Tributes page to make it easy to share your memories.