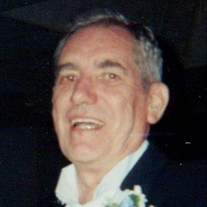 William Hustead Layman, 83, of Fairmont, passed away on Friday, May 7, 2021 at Austinburg Rehab Center in Ohio. He was born March 14, 1938, in Fairmont; the son of the late Lawrence C. and Mildred Hazel (Jones) Layman. William was a graduate of East Fairmont High School. He was a United States Army Veteran and served during Vietnam Era. He retired from Smith Transfer and as a truck driver. He was mechanic for Eastern Coal Company and Morten Salt Mine from where he retired. Will spent his life taking care of others. He was famous among family and friends for his homemade waffles, pies, and pizza. His built his own koi pond. He loved flowers and to cook. He could build, repair almost anything. Will enjoyed camping and golfing. Mostly he loved to make his family happy and dearly loved his dog, Sassy. William is survived by his wife, Carol Janice (Vincent) Layman; one son William C. Layman and his wife Cheryl of Ohio, one step-son Charles Ledsome Jr. and his wife Vicki of Fairmont, stepdaughter, Patricia A. Linn and her husband Ron of Fairmont; one brother Rex Layman and his wife Susie of Fairmont; two sisters Lavada McKinney of Fairmont and Ellen Swiger of Fairmont, his grandchildren Crystal Bennington and her husband John, Joshua Linn, Eric Wheeler and his wife Melissa, Craig Layman and his wife Hillary and Jeremy Slaughter; his great grandchildren Ashlyn and Tred Bennington, Keirra and Issak Linn, Oliver and Case Layman, Zar Parasca, and Coralynn Wheeler; and several nieces and nephews. In addition to his parents, William was preceded in death by his brothers Curtis and Ray Layman. Family and friends are welcome to call at Carpenter and Ford Funeral Home, 209 Merchant St., Fairmont, on Monday from 2:00 – 8:00 p.m., and on Tuesday, May 11, 2021, from 10:00 a.m. until the time of the funeral service at 11:00 a.m., at the funeral home with Pastor Bert Coffman officiating. Interment will follow at West Virginia National Cemetery. Full military honors will be conducted by the United States Army assisted by the Marion County Veterans Council.

William Hustead Layman, 83, of Fairmont, passed away on Friday, May 7, 2021 at Austinburg Rehab Center in Ohio. He was born March 14, 1938, in Fairmont; the son of the late Lawrence C. and Mildred Hazel (Jones) Layman. William was a graduate... View Obituary & Service Information

The family of William Hustead Layman created this Life Tributes page to make it easy to share your memories.

William Hustead Layman, 83, of Fairmont, passed away on Friday,...