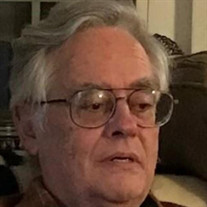 William Alden Foster (Bill), 80, of Clarksburg, passed away Monday, January 17 at WVU United Hospital Center following a hard-fought battle with Covid – 19. Bill was born June 11, 1941 in Ohio; the oldest son of the late Samuel Alden and Marion Foster, of Elkins, WV. Bill is survived by his younger brother George and his wife, Judy, of Port Charlotte, FL., formerly of Fairmont. His niece Brandy and her husband, Jacob Hutchinson, of Fairmont and great-nieces Gracelyn Kershner and Abigail Hutchinson also survive him. Other family members surviving include several cousins scattered throughout the US. Also surviving Bill is his very special friend, Kathleen Panek of Shinnston, WV. Bill was a graduate of Elkins High School, class of 1959 and a graduate of the University of Michigan, Ann Arbor, School of Architecture class of 1964. Following graduation, he worked for the Alden B. Dow Architecture Firm located in Midland, Michigan prior to returning to West Virginia in the mid 80’s. He was an avid bicyclist holding memberships in a number of local and State bicycling clubs. He was extremely proud of his longest completed ride from Ketchikan, Alaska to Nogales, Mexico in the 80’s. This accomplishment was documented via a cover photo on a national bicycling magazine. Bill also assisted with mapping and scouting various routes for fun rides as well as competitive events throughout the State. A natural paring of his love of nature and biking brought about his involvement and support of and for the various Rails & Trails projects and development and held membership in the North Bend Rails to Trails Foundation, Inc. Bill was very involved with ancestry searching and had completed the Foster / Mueller Family Tree Genealogy dating back to John Alden’s arrival on the Mayflower. He spent many hours researching materials from various libraries, newspaper archives and interviewing individuals. His extensive research produced a family spread-sheet with not only names, dates of births and deaths, children of children, but also interesting facts and little tid-bits of information. Definitely a lasting family legacy. Bill had been a member of the Clarksburg Church of Christian Scientists until its recent closing. Per Bill’s wishes, there will be no funeral home visitation or graveside services. A private family celebration of his life will be held at a future date. In lieu of flowers, donations may be made to a charity of your choice.

The family of William "Bill" Foster created this Life Tributes page to make it easy to share your memories.