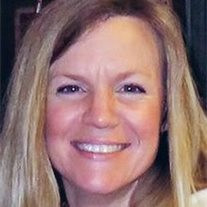 Trina Gwendolyn Bunner Carpenter, 47, of the Bunner Ridge Community, Fairmont, WV, was taken on January 19, 2018. Trina was born in Fairmont on October 18th, 1970, a daughter of Joseph and Alice (Wilson) Bunner. Mother to son Logan Cory Carpenter, and daughter Jaclyn Rae Carpenter, sister to Kevin Bunner and Karla (Bunner) Carpenter and her brother-in-law Robert Carpenter. Daughter-in-law to Joseph and Thelma Jean Carpenter; sister-in-law to Thomas and LeAnn, John and Connie, and Joey and April. Everyone is welcome to come celebrate her life. Those who knew her well, knew her devotion to Christ, family, and friends. Her crafting hobbies were her passion, which she shared with her best friend LeAnn Carpenter. She loved and was very proud of her "In the Country" barnwood crafting. Her children were her true joy. She raised two children who she loved dearly and became so proud of. Her bond with her sister was an inseparable one. The times the two spent apart were few and far between. Her brother Kevin was beloved by her and the relationship between them was strengthened the times they spent together. She was a member of the Bunner Ridge Church of Christ. Her church family was an active and positive influence in her life and were all dear to her heart. A graduate of East Fairmont High school, class of 1988. She was employed by the United States Postal Service for many years, she shared a special bond with her Post Office family, as well. She will be missed by all her family and friends and cherished by all. She was survived by aunts and uncles Della and Dean Huffman, Luella Robe, Mary and Ervin Waters on her father's side; aunts and uncles, Rhodus and Muriel Wilson, Florene and James Murry, Alfred and Sue Wilson, Linda and Robert Bumgardner on her mother's side; nephews and nieces, Thomas Carpenter, Samantha Huffman, John Carpenter, Ryan Bunner, Amanda Carpenter, Christian Huffman, Tyler Carpenter, Stephanie Bunner, Michael Carpenter, Shane Carpenter, Reed Carpenter, Ian Bunner, Liam Carpenter, and Emma Carpenter. She was also survived by many cousins. Friends and family may call at the Carpenter & Ford Funeral Home 209 Merchant Street from 4pm - 8pm on Wednesday and from 12pm - 8 pm on Thursday and from 11 am to 1 on Friday. The funeral service will be at 1:00 pm on Friday, January 26, 2018 at the funeral home with Bob Hayes officiating. Interment to follow at Mt. Nebo Cemetery. Condolences may be expressed online at www.carpenterandford.com.

The family of Trina Gwendolyn Carpenter created this Life Tributes page to make it easy to share your memories.