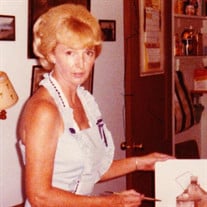 Tina Barron Shaffer (Schofield), 93, former resident of Parkersburg, WV and Belpre, Ohio passed away at her current residence in Fairmont Tuesday, October 12, 2021. She was the daughter of Mr. Nobel Schofield and Edith Lenore Dennison. She was born in Parkersburg, West Virginia January 10, 1928. She was one of four daughters: Thelma Bower, Evelyn Allio and Kathryn Heft. She graduated from Parkersburg High School June 1946 and attended Ohio University. She married Donald L. Barron (divorced/deceased) and had two daughters Diane Jane Barron Binder and her husband Gerald L. Binder of Florida and Debra Barron Bradley and Dale Bradley of Fairmont, WV. She has three grandchildren: Jason Rose, Ashley Stemple and Holly Jane Keller and five great grandchildren, Madison Glasser, Casey Rose, Noah Keller, Lincoln Keller, and Abel Keller. Since 2003, she spent several Winter weeks with her daughter, Diane Binder in Leesburg, Florida and currently lived with her daughter, Debra Bradley in Fairmont, WV. In 1972 she married Donald G. Shaffer (deceased) and raised his children: Donald G. Shaffer II and Denise Shaffer, Myrtle Beach, SC (deceased). They lived in Belpre, Ohio and traveled in their motor home to many places around the country and especially Florida every Winter. She was a member of the Dollmakers Guild in Belpre, Ohio and a member of the Parkersburg, WV Historical Society and the Belpre, Ohio Historical Society. Among many projects, she made lifelike dolls for her daughters and fashioned wigs made from her own hair. Her doll named “Bette Midler” won the award at a show at Coonskin Park in Charleston, West Virginia. That doll is now on display at the Belpre Historical Society Museum. She was also active in making stained glass windows, some of which were donated to the Parkersburg Historical Society. And she worked at St. Joseph’s Hospital. She was always regularly active in many of her children’s school and hobby groups. She participated in attending lunch meetings with City Officials and discussing current events in Parkersburg. Tina attended Stouts Memorial Methodist Church and lived in Parkersburg, WV after her husbands, Donald Shaffer’s passing and remodeled her parents’ home in North Parkersburg. Recently, she lived with her daughter, Debra and Dale Bradley in Fairmont, WV. At her request she will be cremated, and her ashes buried with her husband, Donald G. Shaffer in Rockland Cemetery in Belpre, Ohio. Cremation arrangements were made by Carpenter and Ford Funeral home, Fairmont, WV. A memorial service is pending.

Tina Barron Shaffer (Schofield), 93, former resident of Parkersburg, WV and Belpre, Ohio passed away at her current residence in Fairmont Tuesday, October 12, 2021. She was the daughter of Mr. Nobel Schofield and Edith Lenore Dennison. She... View Obituary & Service Information

The family of Tina Mae Shaffer created this Life Tributes page to make it easy to share your memories.