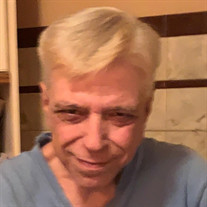 Timothy “Tim” Ray Garlow I, 68, of Fairmont (Meadowdale Community), went to live with his Savior, The Lord Jesus Christ, on Thursday, July 16, 2020, at J.W. Ruby Memorial Hospital from natural causes. He was born on April 16, 1952, in Fairmont, a son of the late Raymond E. Garlow and Geraldine (Turner) Garlow. In addition to his parents, he was preceded in death by his son, Christopher A. Garlow; sisters, Deborah (Garlow) Crane and Carolyn Louise Garlow; and a brother, Ray Garlow. Tim is survived by his sons, Timothy Ray Garlow II and his wife Chelsea; a daughter, Jennifer (Garlow) Raschella and her husband, Tony; and a son, Travis Garlow; granddaughter, Jessica Garlow, and a grandson, Christopher Garlow. He is also survived by sister, Linda (Garlow) Vincent and her husband James, of Oakhill; brother-in-law, Glenn Crane; nieces, nephews, and cousins; good lifelong friend, Dave “Homer” Haught, of Meadowdale; and by his neighbors and friends, who were caring friends that stood by him, as well as his beloved cat, Felix Ann Garlow. Tim was a caring, honorable man, who loved and served his Lord Jesus Christ. He loved talking to people and praying to Jesus for his children, grandchildren, and for everyone he met. He was a carpenter by trade and had been a member of the Carpenters Union Local 476. He attended East Fairmont High School. He also attended Fellowship Baptist Church in Meadowdale. The family of Tim Garlow would like to thank the competent, caring doctors and nurses at Ruby Memorial Hospital who took care of Tim with compassion and dedication. Tim will be at Carpenter and Ford Funeral Home, 209 Merchant St., Fairmont. Due to the recent pandemic of COVID-19, there will be a private visitation and service from 11 a.m. – 1 p.m. His final resting place will be at Maple Grove Cemetery in Fairmont.

The family of Timothy Ray Garlow I created this Life Tributes page to make it easy to share your memories.