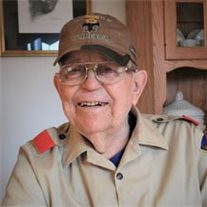 Thomas James Summers Sr., 93, of Fairmont passed away on Sunday, May 6, 2018, at Fairmont Regional Medical Center; he was born on February 12, 1925 in Catawba, the son of the late Albert "Hop" Summers and Helen Summers. He is survived by his wife, Lois May Summers, of Fairmont; his sons and their spouses, Thomas James Summers Jr. and wife Patricia Summers of Baxter, and Harry Albert Summers and wife Lynn Summers of Mannington; and daughters and their spouses, Anna Louise Montalvo of South Carolina, Debra Kay Reese and husband James Reese of Rivesville, and Dottie Lou Sausen and husband Richard Sausen of Morgantown. He is also survived by grandchildren Lonny and Darlene Summers, Tammy and Tim Ortung, Lora Summers, James Thomas and Lisa Summers, Maria and Doug Hilderbrand, Mike and Chayo Montalvo, Bridgette and Joe Vessecchia, Kristy Snyder and Beth Smith, Misti and Brian Wilt, Michael and Natalie Summers, Alicia Montalvo, Johnny and Rose Snyder, Marie and Andy Bostaph, Kristina and Bruce Cheslock, and Rebecca Sausen; a sister, Helen "Toy" Neel and husband Les of Ohio; brother-in-law Ralph Culp of Morgantown; several great-grandchildren and great-great grandchildren, as well as many neices and nephews. In addition to his parents, Thomas was preceded in death by his first wife, Helen Louise Summers. He was also preceded in death by a son-in-law, Anthony "Tony" Montalvo; grandson Kevin Summers; granddaughter Bridget Snyder; great-grandson Patrick Clawson; brothers Albert Summers and wife Maxine and Ray Summers and wife Alma "Tootie"; sisters Margaret Culp, Etta Mae Carr, and Naomi Davis. He was a beloved Camp Ranger at Camp Mountaineer for the Mountaineer Area Council, Boy Scouts of America for 20 years. Thomas proudly served his country in the US Navy during World War II. He was chosen to escort the USS West Virginia from Pearl Harbor to Washington State. He will always be remembered by his friends and family for the times they sat around together, listening to him sing and play his guitar. Viewing will be held at Carpenter and Ford Funeral Home, 209 Merchant Street in Fairmont on Thursday from 1pm to 8pm and Friday from 10am to 11am; the funeral service will be held at the funeral home on Friday at 11:00 a.m. with Rev. Gary Steele officiating. Interment will follow at Catawba Cemetery, with full military rights being conducted by the Marion County Veteran's Council Honor Guard. In lieu of flowers, the family requests that donations be made to the Mountaineer Area Council, Boy Scouts of America, 1831 Speedway Ave., Fairmont, WV 26554.

Thomas James Summers Sr., 93, of Fairmont passed away on Sunday, May 6, 2018, at Fairmont Regional Medical Center; he was born on February 12, 1925 in Catawba, the son of the late Albert "Hop" Summers and Helen Summers. He is survived by his... View Obituary & Service Information

The family of Thomas "Tom" James Summers, Sr. created this Life Tributes page to make it easy to share your memories.

Thomas James Summers Sr., 93, of Fairmont passed away on Sunday,...