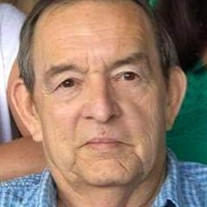 Thomas Edward “Eddie” Butcher, 69, of Fairmont, passed away on December 31, 2018 at his home. He was born on June 12, 1949, a son of the late Reverend Robert L. Butcher and Marjorie P. (Goff) Butcher. Ed graduated from East Fairmont High School is 1967 and later went on to get an Electrician’s Degree at Marion County Vocational Technical Center. He worked at Davis Auto, Sharon Steele Corp, Rivesville Power Station, Allegheny Energy Harrison Division. He was active with the East Fairmont High School Band for ten years. The last three years he and his wife served as councilors and he served as President. He will be remembered for his love of spending time in the cabin he built in Tucker County, hunting, and salmon fishing in Michigan. Ed was a 32nd Degree Mason with the A.F.&A.M. Masonic Lodge NO. 9 in Fairmont and the Scottish Rite in Morgantown and Wheeling. He was a Methodist by faith. Ed never met a stranger; everywhere he went he made friends. He loved his family and going to the cabin for picnics and get-togethers. Ed was a wonderful husband, father, and son. We all feel blessed that we had him. Ed is survived by his devoted wife of 50 years, Linda S. (Noshagya) Butcher. He is survived by his daughter, Stacy L. Butcher & Fiancé Jon Dodds of Fairmont; son, Edward A. “Bud” Butcher, of Grafton; grandchildren: Deveny A. (Butcher) Crain & her husband Nick, and Taylor A. Butcher; and two great-grandchildren. Ed is also survived by sisters: Wanda Spencer, of Ohio and Mary L. Haught (Ronald), of Fairmont. In addition to his parents, Ed was preceded in death by brother, Robert E. Butcher. Family and friends are welcome to call at Carpenter and Ford Funeral Home on Thursday, January 03, 2019 from 1 p.m. – 8 p.m. and on Friday, January 4th from 10 a.m. to 11 a.m., with services starting at 11:00 a.m. on Friday at the funeral home, with Pastor Tony Meluzio and Pastor Joy Butcher-Winfree officiating. The family would like to extend their gratitude to Amedysis Hospice and nurses Courtney McKnight and Corina (Harvey) Kettle, as well as Angie Thobois, Karen Shriver, Kerri Bennett, Dr. Perry Hall, and Mary Joyce. The family would also like to thank Pastor Tony Meluzio and Pastor Joy Butcher-Winfree, as well as the many family and friends who helped and touched their hearts.

The family of Thomas Edward Butcher created this Life Tributes page to make it easy to share your memories.

Thomas Edward “Eddie” Butcher, 69, of Fairmont, passed away on...