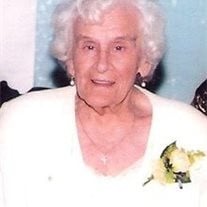 Theresa Mary Noshagya Theresa Mary (Kaduk) Noshagya, 93, of Fairmont, Meadowdale Community passed away Wednesday June 1, 2011 at Arbors at Fairmont Nursing Center. She was born in Toledo, Ohio on June 10, 1917, a daughter of the late Paul Kaduk Sr. and Teresa (Simko) Kaduk Toth. She had worked at Westinghouse, working in the seal beam department for 17 years and then in the glove room, retiring in 1980. She was a graduate of East Fairmont High School. She was a member of Immaculate Conception Roman Catholic Church as well as St. Joseph Catholic Church and was a member of the 300 Bowling Club. She enjoyed crocheting, quilting, spending time with all her family and was avid animal lover, especially for her cat, Tucker. Theresa is survived by two daughters, Sharon Ann Wadsworth of New Port Richie, Florida and Linda Butcher and her husband Eddie of Fairmont, five grandchildren, Karen Harshman and her husband Clyde of Jacksonville, FL, Roger Lee Valentine and his wife JoAnn of Lemont Furnace, PA, Danny Valentine of Uniontown, PA, Edward Allen Butcher and his wife Beth of Grafton, and Stacy Lin Greaver and her husband Mike of Fairmont, and six great grandchildren, Kelly Marie Koziel, John Michael Koziel, Tiffany Chilzer and her husband Tony, Danny Valentine Jr., Deveny Ann Butcher, and Taylor Ann Butcher. In addition to her parents, she was preceded in death by two brothers, Paul Kaduk Jr. and Louis Kaduk, a sister, Elizabeth Kropog, and a grandson, Dennis Valentine. Family and friends may call at the Carpenter and Ford Funeral Home, 209 Merchant St., Fairmont on Sunday from 2-8 pm and on Monday from 11am-1pm. The funeral service will be held at the funeral home on Monday June 6, 2011 at 1:00 pm with Father Richard Ulam OSB officiating. Interment will follow at Mt. Zion Cemetery in Fairmont Online condolences may be left for the family at www.carpenterandford.com

The family of Theresa Mary Noshagya created this Life Tributes page to make it easy to share your memories.