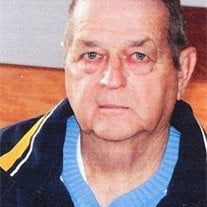 Terence Towson Terence Eugene Towson, 73, of Fairmont, Boothsville Community, passed away on Monday, January 10, 2011 at his home surrounded by his loving family. He was born in Grant Town a son of the late Terence D. Towson and Dorothy C. (Michael)Towson. Terence proudly served his country in the United States Air Force for four years. He retired from the Eastern Peabody Coal Company. He was a member of the American Legion. He was known as the “King” of dirt track racing in the Tri-State area. Terence enjoyed music, fishing, NASCAR and motorcycles. He was also recognized as the “Mayor of Boothsville”. Terence loved his country, his community and his family. He is survived by his soul mate and companion, Phyllis Morris of Boothsville; his children, Terry Towson and his wife Gina of Fairmont, Jerry Towson and his companion Amy Griffith of Shinnston, Cathy Morris of Hampton, Virginia, Tammy Watson and her husband Tony of Charleston, Rock Morris of Killarm, Todd Morris and his wife Kim of Worthington and Pamela Vanfosson of Monongah and his grandchildren, Heather L. Morris, Brianna Towson, Terri Towson, Kaitlynn Towson, Kendra Harrin and her husband Keith, Kalya Morris and Heather D. Morris. In addition to his parents, Terence was preceded in death by his only brother, James Lee Towson. Friends and family may call at the Carpenter & Ford Funeral Home, 209 Merchant Street on Wednesday from 12pm to 8pm. In keeping with the wishes of the deceased, his body will be cremated following the visitation. A private graveside service will be held at a later date at the West Virginia National Cemetery. Memorial contributions may be made to Hospice Care, 1406 Country Club Road, Fairmont, WV 26554. Online condolences may be sent to the Towson Family at www.carpenterandford.com.

Terence Towson Terence Eugene Towson, 73, of Fairmont, Boothsville Community, passed away on Monday, January 10, 2011 at his home surrounded by his loving family. He was born in Grant Town a son of the late Terence D. Towson and Dorothy C.... View Obituary & Service Information

The family of Terence Eugene Towson created this Life Tributes page to make it easy to share your memories.