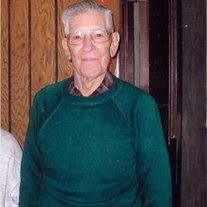 Sterling Godfrey Sterling David Godfrey, 92, of Pleasant Valley, went home to be with the Lord on Thursday, April 22, 2010 at Monongalia General Hospital in Morgantown. He was born at Burnsville in Braxton County on January 8, 1918 a son of the late Manderville Godfrey and Genevieve (Harris) Godfrey. Mr. Godfrey was preceded in death by his wife of 62 years, Alma (Neel) Godfrey in March of 2006. He graduated from Burnsville High School and attended Fairmont State College. Sterling proudly served his country in the United States Navy, as a Electrician’s Mate First Class, during WWII, 1940 -1945. He was a survivor of Pearl Harbor along with service on the USS Phoenix, the USS Yorktown and the USS Etamin IX in Australia, Philippine Islands, South America and the Indian Ocean. He retired from the Monongahela Power with over 35 years of service where he performed appliance repair and substation maintenance. He was a member of the Christ United Methodist Church/Gateway United Methodist Church. Sterling was an avid golfer and member of the White Day Golf Course. In addition, he was a member of the Quarter Century Monongahela Power Association, the Pioneers of Monongahela Power, and the WV Travelers Inc. He is survived by his son Larry R. Godfrey and his wife Rose of Kansas; his daughters, Carol Lee Aronhalt of Fairmont, Cheryl L. Cochran and her husband Martin of Pleasant Valley and Lana K. Sandy of Shinnston; two brothers, William Godfrey of Burnsville, and Eugene Godfrey and his wife Teena of Weston, one sister Leona Godfrey of Richwood, his grandchildren and their spouses, Richard and Benea Godfrey, Trisha and Scott Snyder, Miriam and John Bingamon, John and Marci Cochran, Michael Aronhalt and David and Melissa Aronhalt, his great-grandchildren, Talon Godfrey, Aiden Godfrey, Caitlin and Robyn Snyder, Leandra and Dylan Messenger, Spencer Aronhalt, and Brandon Uphold, as well as several nieces and nephews. In addition to his parents and wife, Sterling was preceded in death by three sisters, Kate, Ivy, and Laverna, a son-in-law Ervin Aronhalt, and a sister-in-law Alta Godfrey. Family and friends may call at the Carpenter and Ford Funeral Home, 209 Merchant St., Fairmont, on Friday, April 23, 2010 from 4-9 p.m. and on Saturday, April 24, 2010 from 11 a.m. - 1 p.m. Funeral services will be held at the funeral home at 1:00 p.m. with the Reverend Donald Thomas officiating. Interment will follow at the Mt. Zion Cemetery where full military honors will be conducted by the Marion County Veterans Council Honor Guard. Memorial Contributions may be made to The Foundation of Monongalia General, Benefit Oncology, 1200 J D Anderson Drive, Morgantown, WV 26505. Online condolences may be sent to the family at www.carpenterandford.com

Sterling Godfrey Sterling David Godfrey, 92, of Pleasant Valley, went home to be with the Lord on Thursday, April 22, 2010 at Monongalia General Hospital in Morgantown. He was born at Burnsville in Braxton County on January 8, 1918 a son of... View Obituary & Service Information

The family of Sterling David Godfrey created this Life Tributes page to make it easy to share your memories.