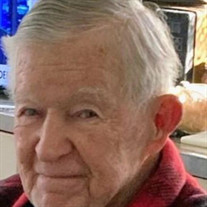 H. Stephen Thompson was born December 29, 1933 in Spencer, WV to Earl Brown and Georgia McAllister Thompson. The family moved to Fairmont when Steve was seven. He attended Fleming, Jayenne, Fairmont Junior and Senior High Schools. Stephen spent four years in the USAF as a radio operator on B-29s. Upon his return to Fairmont, he graduated from Fairmont State College with Bachelor of Science Degree in Business Administration. He married and moved to Littleton, Colorado. He worked in sales and real estate settling in Sedona, Arizona. Steve served his country in the United States Air Force from 1953 – 1957 as a Senior Airborne Radio Operator on a B-29 with the rank of Staff Sergeant. He was a member of the American Legion, Veteran’s of Foreign Wars, the Air Force Association, Benevolent Order of the Elks, and Marion County Historical Society. He eventually returned to Fairmont with his second wife, Christine Keister, and retired. He always remembered his paper route 13 in Edgemont, getting up at 5am to deliver The Fairmont Times even through the 50" of snow in 1950. He was predeceased by his wife, Christine, his sister, Dodie Conaway and his brother Earl Thompson, Jr, (Bud) Steve is survived by his daughter, Melissa and her husband, Ty of Independence, Oregon. his son, Stephen Andrew and his wife, Laurie of Pueblo West, Colorado. Grandchildren Thomas Morgan Joseph, Daniel John Joseph, Courtney Thompson Price and her husband, Jerry, and Scott Thompson and five great-grandchildren. He is survived by his niece, Connie Butcher and nephew, John Thompson of Fairmont. He is also sadly survived by his baby sister, Sue Thompson Arthur of Weymouth, MA Rest in peace, brother. Graveside services will be held on Monday, February 14, 2022 at 11:00 AM at the West Virgina National Veterans Cemetery in Pruntytown. In lieu of flowers, donations may be made to the Disabled American Veterans PO Box 14301 Cincinnati, Ohio in Steve's memory. Condolences and Memories may be shared with the family at www.carpenterandford.com

The family of Stephen "Steve" Thompson created this Life Tributes page to make it easy to share your memories.