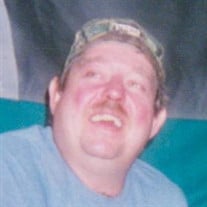 Stephen “Joe” Allen Neel, 53, of Grafton, passed away on Saturday, August 17, 2019, after a lengthy courageous battle with cancer, comforted by angels, surrounded by his loving family and friends, and reunited with his parents. He was born on January 23, 1966, in Fairmont, a son of the late Stephen C. and Linda Darlene (Smallwood) Neel. Joe started working as a mechanic at the age of 21, first working at City Tire, and then City Automotive and Christy Machine, which led him to opening his own business in 2010, Hillside Auto Repair. He also delivered newspapers for the Times WV, which was always a family affair. Joe will be remembered for his love of music, hanging out in his garage, playing pool, going to yard sales (with family in tow), making up dances, wearing his heart on his sleeve, but most of all, his family and friends. He was a true man of his word. Joe is survived by his loving wife of 32 years, Anita (Knight) Neel. He is also survived by his son, BuddyJoe “BJ” Bartholow, of Fairmont; daughter, Amanda Helms, of Fairmont; grandchildren: Micah, Jayson, and Joseph Barnett, and Emma Helms; sisters, Alice Lea Kisner, of Fairmont, and Stephanie Abel and husband Ray, of Fairmont; nieces: Holly Abel, Baileigh Abel, and Jasmin Ocasio; nephews, Brian Abel, Kyler Abel, and Eric Swecker; uncle, Aaron Smallwood and wife, Lori; aunts, Mary Alice (Neel) Compton and husband Sonny, and Bonnie Smallwood; brother-in-laws, Wesley Knight and wife Paula, Jamie Knight and wife Barbara, and Clyde Knight; and best buddies: Daisy, Tiny, and Charlie. Once Joe met you, you were not only a friend, but family – he never met a stranger; he leaves behind many wonderful, loving friends. In addition to his parents, he was preceded in death by grandparents, Arnold and Mary Neel, and George and Aleatha Smallwood; mother and father-in-law, Wesley “Pete” and Merle Knight; and several aunts, uncles, and cousins. Family and friends are welcome to call at Carpenter and Ford Funeral Home, 209 Merchant St., Fairmont, on Sunday from 2 p.m. – 8 p.m., and on Monday from 10 a.m. – 1 p.m., with services being held at the funeral home on Monday, August 19, 2019 at 1:00 p.m. with Pastor Rex Musgrove and Pastor Beth Luffy officiating, with Stephen Luffy speaking. Interment will follow at Mt. Zion Cemetery.

Stephen &#8220;Joe&#8221; Allen Neel, 53, of Grafton, passed away on Saturday, August 17, 2019, after a lengthy courageous battle with cancer, comforted by angels, surrounded by his loving family and friends, and reunited with his parents. He... View Obituary & Service Information

The family of Stephen Allen Neel created this Life Tributes page to make it easy to share your memories.