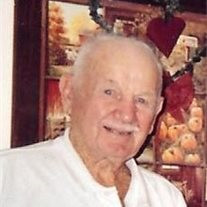 Stanley Racut Stanley P. Racut, of Reubens Run Road, Fairmont passed away on Thursday, April 29, 2010. He was born on December 5, 1922 in Buffington, Pennsylvania the last surviving of eight children born to the late Peter J. Racut and Antoinina (Leja) Racut. Stanley served in the CCC/ Civilian Conservation Corps. He then entered the US Marine Corps 2nd Division in 1942 and proudly served for four years during World War II. He retired from the Regional Transit Authority in Cleveland, Ohio. He worked as a driver for 22 years and retired in 1974 as lead foreman in the maintenance department. He was a member of St Johns Roman Catholic Church in Cleveland and had attended Immaculate Conception Roman Catholic Church in Fairmont. He was a devoted husband, loving and proud father, grandfather and great grandfather. Stanley touched so many lives and he will always be loved and missed greatly. He is survived by his loving wife of 67 years, Patricia Ann (McCray) Racut; three sons and three daughters, Patrick Racut and his wife Linda and their children of Cleveland, Ohio, Kathryn Dyroff and her husband Fred and their children and grandchildren of New Jersey, Joseph Racut and his wife Connie and their children and grandchildren of Florida, Corena Bowling and her husband Mike and their children and grandchildren of Fairmont, Valerie Cavanaugh and her husband Jim and their children and grandchildren of Florida and Frank Racut and his wife Terry and their children of Morgantown and several nieces and nephews. In addition to his parents, he was preceded in death by his brothers and sisters, Stella, Walter, Joseph, John, Frank, Edward and Helen. Friends and family may call at the Carpenter & Ford Funeral Home, 209 Merchant Street, Fairmont on Monday from 1pm to 4pm and 6pm to 9pm. The funeral service will be held at 11am on Tuesday, May 4, 2010 at the funeral home with Father John P. Mulcahy officiating. Flag folding rites will be conducted at the funeral home by the Marion County Veterans Council Honor Guard. Interment services will follow at Mt. Zion Cemetery. In lieu of flowers memorial contributions may be made to Hospice Care Corp. , 1406 Country Club Road, Fairmont, WV 26554 or Fairmont General Hospital Cancer Center, 1325 Locust Avenue, Fairmont, WV 26554. Online condolences may be sent to the Racut Family at www.carpenterandford.com.

The family of Stanely P Racut created this Life Tributes page to make it easy to share your memories.