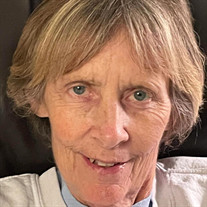 Shelley Bea Hyde, 70, of Fairmont, West Virginia, passed away on January 23, 2022 at her home. Diagnosed with cancer four years ago, Shelley refused to be seen as a cancer patient, remaining active through surgeries and treatments and remaining a threat on the golf course until late last fall. Shelley was born in Clarksburg, WV, on October 6, 1951, the first daughter of the late Cecil Will Hyde, Jr. and Wanda Mae Smith Hyde. In her youth, she enjoyed playing outside and spent summers swimming at Lake Floyd. This sweet, idyllic childhood was in reality the beginning of a bold and talented life-long athlete. Shelley grew up competing with the boys in her neighborhood, and she didn’t let the fact that girls’ sports weren’t taken seriously stop her from honing her skills. In the 5th grade, she was instrumental in forming a female church league team, recruiting her friends to play and asking her uncle to coach. That team went on to compete against adult teams in the WV Women’s State Basketball Championship in Charleston. The young team came up short, but they gave the adult teams a run for their money. As a teenager, Shelley swam competitively on a team for Lake Floyd and dominated the basketball courts her senior year when she joined the Washington Irving High School sports club, all before Title IX transformed women’s athletics. When Shelley found out she could continue playing basketball in college, she was all in, but she wasn’t a one-sport-wonder. If it was a sport, she wanted to play it, and she was going to be good at it. Shelley was a winner. At Fairmont State, Shelley played field hockey, volleyball, softball, and tennis. And, yes, basketball. (She didn’t swim at FSC because the season coincided with basketball, her true love.) Shelley was a member of the FSC Women’s Basketball Team---yes, Shelley was a Falconette. Fairmont State didn’t keep records on female sports in the 1970s, but Shelley’s mom sure did. Her team won the state championship for the first time in the school’s history, with Shelley as one of the top four scorers in the title game and in the tournament. In 1975, she competed in the Olympic Trials for a spot on the US Women’s Basketball Team. A 1973 graduate of Fairmont State College with a degree in education, Shelley went on to teach for more than thirty years in Harrison County, WV, mostly at Gore Middle School. She also coached volleyball, track, softball, and basketball during her teaching career. After college, she turned her sights to golf but still played softball and basketball regularly. Shelley excelled at golf, just as she had all the other sports. A member of Green Hills Country Club since 1999, she earned the Ladies’ Golf Association Championship title numerous times. She represented Green Hills for many years in the Women’s Intrastate Team Matches and Mountaineer Golf League through her membership with the LGA. Always competitive, she was widely known as the “one to beat” in her circle of golfers, and she welcomed a good challenge. A passionate fan of WVU sports, Shelley could be found cheering the basketball team on from her seat in the Coliseum or pacing in her living room, texting friends and family to analyze the game. She was also a generous patron of the Fairmont State Golf Teams in recent years. This woman loved with all her heart---her family, her friends, her animals, and her sports. Shelley brought so much love and laughter to everyone in her life. Despite being a fierce competitor at sports, she didn’t have a mean bone in her body; in fact, she loved nothing more than to help someone else improve at a game. She was quirky and stubborn but always willing to laugh at herself. She will be missed by countless friends who adored her. Shelley is survived by her partner, Jill Stiles, of Fairmont, her sister Elizabeth “Babbs” and husband Robert Tolley of Bridgeport, and her nephew, Ryan Will Tolley, also of Bridgeport, whom she adored. In addition to her parents, Shelley was preceded in death by her nephew Alan Clark Tolley. For ten years after Alan’s death, Shelley and her family hosted a yearly golf tournament in his name, raising over $50,000 for juvenile diabetes. Friends and family would like to thank Amedisys Home Health for their generosity and care during the last weeks of her life. Memorial contributions may be made to the Marion County Animal Shelter, PO Box 905, Fairmont, WV, 26555-0905. A celebration of life will be held at Green Hills Country Club, 126 Green Hills Lane, Fairmont on Saturday, April 30, 2022, from 2:00 – 4:00 p.m.

Shelley Bea Hyde, 70, of Fairmont, West Virginia, passed away on January 23, 2022 at her home. Diagnosed with cancer four years ago, Shelley refused to be seen as a cancer patient, remaining active through surgeries and treatments and remaining... View Obituary & Service Information

The family of Shelley Bea Hyde created this Life Tributes page to make it easy to share your memories.