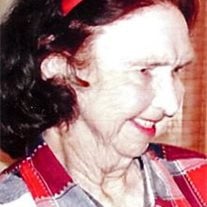 Sara Frances Baker Burns, 86, of El Centro, California passed away on Tuesday, November 3, 2009 at her home. Frances was born on July 6, 1923 on a small farm in Marion County a daughter of the late James L. Baker and Minnie Vincent Baker, where she learned her values and work ethic. She was educated in the Marion County school system and graduated from East Fairmont High School in 1940. Frances was a former member of the Diamond Street United Methodist Church/Gateway United Methodist Church. Her late husband, James, joined the United States Border Patrol and after a couple of transfers the family settled in El Centro. James died on duty in 1968 and Frances remained in El Centro while always keeping West Virginia as her home in her heart. She instructed at the cosmetology school in El Centro until she retired. While her family was the center of her life, she found time to volunteer at the First United Methodist Church, the American Cancer Society and the Spartan Athletic Club. Frances belonged to the Women’s Auxiliary with the local Eagles Lodge and was a member of the Daughters of the American Revolution the Colonel Morgan Morgan Chapter of Fairmont. Frances is survived by her son James G. Burns, Jr. and his wife, Robertta of El Centro; her granddaughters, Jacki Burns and her husband Nathan Richards of San Diego and Brooke Burns of El Centro; a great granddaughter, Madelaine Burns Richards; her sister Grace B. Vincent of Fairmont; her sister-in-law Frances (Fran) Baker of Lewes, Delaware and numerous nieces and nephews. In addition to her parents and husband, Mrs. Burns was preceded in death by her brothers, Earl Baker, Luther Baker, James Baker and Herbert Baker and her sisters, Mary B. Neel, Mildred Shaffer, Edythe Rogers and Ethel Squires. Friends and family may call at the Carpenter & Ford Funeral Home, 209 Merchant Street Fairmont on Wednesday from 4pm to7pm and on Thursday from 10am to 11am. Funeral services will be held on Thursday, November 12, 2009 at 11am at the funeral home with Pastor Jim Zinn officiating. Interment will immediately follow at Vincent Cemetery on East Grafton Road in Fairmont.

Sara Frances Baker Burns, 86, of El Centro, California passed away on Tuesday, November 3, 2009 at her home. Frances was born on July 6, 1923 on a small farm in Marion County a daughter of the late James L. Baker and Minnie Vincent Baker, where... View Obituary & Service Information

The family of Sara Frances Burns created this Life Tributes page to make it easy to share your memories.