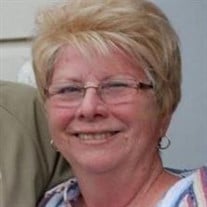 Sandra Joyce (Robe) Bunner, 77, of Bunner Ridge, passed from this life on June 15, 2021, at J.W. Ruby Memorial Hospital, Morgantown. Daughter of the late Emery Theodore Robe and Edra Lilleth (Shuttleworth) Robe, she was born on June 13, 1944, on her great grandfather Elias Jones Farm (later George and Elsie (Jones) Robe’s farm) on Laurel Run, Marion County. Sandra is survived by her loving husband of 58 years, Edwin Lee Bunner, her childhood sweetheart, whom she married on June 8, 1963, three sons and their wives: Edwin Dean Bunner and Lana (Sabo) Bunner, Phillip Shawn Bunner and Rebecca (Ailstock) Bunner and Benjamin Leroy Bunner and Amanda (Merrifield) Bunner, and one daughter and her husband: Melody Lynn (Bunner) Palmer and Rodney Palmer. She is also survived by ten grandchildren: Ashley (Bunner) Stevens (Johnathan), Alisha Bunner, Abby (Bunner) Onderko (Hunter), Carissa (Bunner) Haymond (Matthew), Cody Bunner (Meredith), Cory Bunner (Katelyn), Hannah (Bunner) Stire (Tyler), Paisley Bunner, Colten Bunner, Skyler Palmer and seven great-grandchildren: Jayden Shank, Luke Stevens, Ella Stevens, Jax Bunner, Cassidy Bunner, Brantley Bunner, and Miszoura Stire. She is also survived by two sisters, Carolyn (Robe) Bunner (Camden) and Linda (Robe) Perkins (Joe) and one sister-in-law Luella (Bunner) Robe and many nieces, nephews, cousins, and friends. Sandra has been a member of the Church of Christ at Mt. Nebo her entire life. She had been the bookkeeper and business manager for Bunner and Sons Construction, a member of the Bunner Ridge CEOS Club for 58 years and actively involved with the Bunner Ridge Community Association-Heritage Days (Fall Festival) making apple butter and assisting with all events. Early in her life and before she was married, she attended Fairmont General School of Nursing. She was a secretary for the Marion County CEOS and belonged to the Women’s Club of Fairmont. Sandra has always been a country girl, enjoying the outdoors hunting, fishing, gardening, and growing flowers. One of the greatest joys was cooking for her family, friends and loves ones. Her other interest was going “antiquing” to find a treasure. In addition to her parents, Sandra was preceded in death by one brother, Lowell Dean Robe: one sister Anna Lee (Robe) Terry and one daughter-in-law Sandra (Raschella) Bunner. Sandra was loved by all who knew her and the shining light in her family and circle of friends. She will be sadly missed. Family and friends are welcome to gather at Carpenter and Ford Funeral Home, 209 Merchant St., Fairmont, on Friday from 1:00 – 8:00 p.m. at the funeral home, and on Saturday, June 19, 2021, at the Church of Christ at Mt. Nebo from 12:00 p.m. until the time of the funeral service at 1:00 p.m., with Evangelists Steve Stevens and Norman Floyd, officiating. Interment will follow at the Church of Christ at Mt. Nebo Cemetery

The family of Sandra Joyce Bunner created this Life Tributes page to make it easy to share your memories.