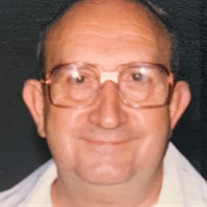 Samuel Glenn Tucker Jr., 92, of Fairmont, passed away on July 04, 2019, at his home, surrounded by his family. He was born on October 25, 1926 in Fairmont, a son of the late Samuel Glenn Tucker Sr. and Mary Anna (Wyer) Tucker. Samuel proudly served his country in the United States Air Force at the end of WWII and in the United States Army at the beginning of the Korean War. After his service, he went to work at Westinghouse/North American Philips, retiring after 40 years. He was a Charter member of Victory Baptist Church and Fellowship Baptist Church. In addition to his parents, he was preceded in death by his wife, Jeness Manoka (Brady) Tucker, to whom he was married for 65 years. He is survived by his son, David Bruce Tucker and wife Robin, of Fairmont; his daughter, Karen Fay Perkins and husband Mark, of Wheeling; his sister, Emajane Marks, of Maryland; his brother, Jesse “Bing” Tucker and wife Martha, of Fairmont; his grandchildren: Curt Tucker and wife Terresa, Justin Tucker, Samuel Tyler Tucker, and Tanner Glenn Tucker; and his great-grandchildren: Keyshawn, Kayden, Kohen, and Colton. The family would like to extend their gratitude to caretakers, Connie Rutherford and Theresa Bruno; physicians, Dr. Ward Paine and his P.A. Ben Klennert, and Dr. Richard Ham; Amedysis Hospice and the Veterans Health Administration System; and a special recognition to Tanner Glenn Tucker, for his special care of Pappy. Family and friends are welcome to call at Carpenter and Ford Funeral Home, 209 Merchant St., Fairmont, on Monday from 3 p.m. – 8 p.m. and Tuesday from 10 a.m. – 11 a.m., with services starting at 11:00 a.m. at the funeral home on Tuesday, July 09, 2019, with Pastor Dave Meyer and Pastor Mark Perkins officiating, and great-great nephew Andrew Carpenter assisting. Interment will follow at Mt. Zion Cemetery with Full Military Honors conducted by the Marion County Veterans Council Honor Guard and United States Army Reserves from Camp Dawson.

Samuel Glenn Tucker Jr., 92, of Fairmont, passed away on July 04, 2019, at his home, surrounded by his family. He was born on October 25, 1926 in Fairmont, a son of the late Samuel Glenn Tucker Sr. and Mary Anna (Wyer) Tucker. Samuel proudly... View Obituary & Service Information

The family of Samuel Glenn Tucker Jr. created this Life Tributes page to make it easy to share your memories.

Samuel Glenn Tucker Jr., 92, of Fairmont, passed away on July...