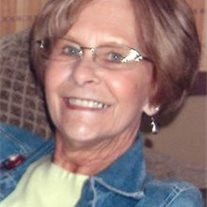 Ruth Boyce Ruth Mae (Linn) Boyce, 64, of Fairmont, Bunner Ridge Community, passed away at her home with her loving family by her side, following a courageous fight with Breast Cancer, on Tuesday, February 9, 2010. She was born in Fairmont on February 4, 1946 a daughter of Dora Vincent Linn Criss of Hammond and the late Clarence Linn. She is survived by her husband of 35 years, George G. Boyce. Ruth was a devoted homemaker, wife, mother, grandmother and great grandmother. She was known by her family as "Nan" because of her special relationship with her grandchildren. She was a member of the Hebron Baptist Church and attended Viola Church. She spent much of her time gardening. Ruth was completely devoted to raising her children and greatly enjoyed spending time with her family. In addition to her mother and husband, she is survived by two sons and a daughter; Gary Lee Starn and his wife Bunny of Fairmont and Bryan Scott Wilder and his wife Andrea of White House, Ohio; Christy Wilder Rust and her husband Joe of Cheyenne, Wyoming; three brothers and sisters-in-law, Clarence "Bud" and Janet Linn, John and Mary Linn and Kenny and Mona Linn all of Fairmont; two sisters and brothers-in-law, Bonnie and Jim Bennett of Oakland, Maryland and Marcie and Marvin Costello of Baxter; eight grandchildren, Jessica and her husband Gene Dobson, Justin Starn, Alec Wilder, Laura Wilder, Rachel Wilder, Jhordann Rust, Morgen Rust and Kalin Rust; great grandchildren, Nathan Lewis, Alexa Dobson, Mykah Dobson and many nieces and nephews. In addition to her father, she was preceded in death by her step father, Henry Criss. Ruth's family would like to extend a special thank you to Hospice Care and the Doctors and Staff of the Mary Babb Randolph Cancer Center for their wonderful care during her illness. Friends and family may call at the Carpenter & Ford Funeral Home, 209 Merchant Street, Fairmont on Thursday from 6pm to 9pm and Friday 1pm to 9pm and Saturday 11am to 1pm. The funeral service will be at 1pm on Saturday February 13, 2010 at the funeral home with Pastor Scott Krepps officiating. Interment will follow at the Glady Creek Cemetery. Memorial contributions may be made to Hospice Care, 1408 Country Club Road, Fairmont, WV 26554 or American Cancer Society, Marion Unit, 122 South High Street, Fairmont, WV 26501. Online condolences may be sent to the Boyce Family at www.carpenterandford.com.

Ruth Boyce Ruth Mae (Linn) Boyce, 64, of Fairmont, Bunner Ridge Community, passed away at her home with her loving family by her side, following a courageous fight with Breast Cancer, on Tuesday, February 9, 2010. She was born in Fairmont... View Obituary & Service Information

The family of Ruth Mae Boyce created this Life Tributes page to make it easy to share your memories.