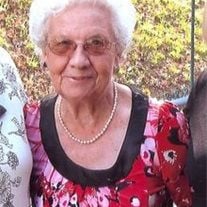 Rosetta DeVault Rosetta Mae Hayhurst DeVault, 77, of Fairmont, Winfield Community, passed away on Thursday, October 15, 2009 at Fairmont General Hospital She was born in Marion County on November 25, 1931 a daughter of the late Delbert Franklin Hayhurst and Mary Genevieve Nuzum Hayhurst. Rosetta was a homemaker, loving wife, devoted mother, grandmother and great grandmother. She had worked for the Marion County Board of Education cleaning the Winfield School for a number of years. She also did child care for friends. She attended Mt. Sharon Free Methodist Church and was a member of the Winfield United Methodist Church. A kind, loving lady, she especially enjoyed being a homemaker, growing flowers and taking care of her husband and children. She was preceded in death by her beloved husband of 58 years, Darrell Ray DeVault on September 12, 2008 She is survived by two daughters and sons-in-law, Deborah R. and Chip West of Fairmont and Linda and John McClure of Carlisle, Pennsylvania; two brothers, Charles Edward Hayhurst and his wife Judy of Winfield and Gary Ray Hayhurst of Weirton; two sisters, Gay King and her husband Edward of Morgan Ridge and Mary Ann Fink and her husband Robert of Shippensburg, Pennsylvania; her sister-in-law, Mary Hayhurst of Fairmont; her grandchildren and their spouses, Jackie and Jeb Brown, of Carlisle, Pennsylvania, Michael and Becky McClure serving with the US Military, Andrea McClure of Carlisle, Pennsylvania, Justin West of Fairmont and Brittanie West of Morgantown; her great grandchildren, Robert McClure, Cassandra McClure, Kyler Brown, Kyrsten Brown , Kaitlyn Talbot and Colin Talbot; very special friends, Kathy and Rick Morgan and their daughter Courtney; and several special nieces and nephews. In addition to her parents and husband, Rosetta was preceded in death by her brother, Larry Fay Hayhurst; her sister Barbara Jean Hayhurst and a great grandson, Christopher Michael McClure. Friends and family may call at the Carpenter & Ford Funeral Home, 209 Merchant Street, Fairmont on Saturday from 5pm to 9pm and Sunday 10am to 2pm. The funeral service will be held at 2pm on Sunday, October, 18, 2009 at the funeral home with Pastor Rex Musgrove officiating. Interment will follow at Mt. Zion Cemetery. online condolences may be made at Carpenterandford.com

The family of Rosetta Mae DeVault created this Life Tributes page to make it easy to share your memories.