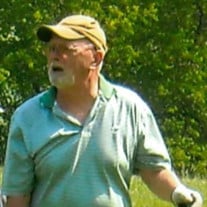 Ronald “Ronnie” Lee Satterfield, 84, of Fairmont, passed away on Wednesday, March 25, 2020, at Nella’s Nursing Home in Elkins. He was born on January 29, 1936, in Greensboro, Pennsylvania, a son of the late Charles Satterfield and Gladys (Wilson) Satterfield. After graduating high school, Ronnie went on to proudly serve his country in the United States Navy. He was the owner and operator of Flowers by Ronnie in Fairmont; he was a talented florist who made grave mounds for many in the community. He will be remembered for his love of golf, friends, family, and neighbors. Ronnie is survived by sons, Brad Satterfield and Ronald Satterfield Jr. and wife Tracie, all of Fairmont; best friend and partner, Martha Layton; grandchildren: Heaven Satterfield, Jake Satterfield, Madeline Satterfield, and Caleb Satterfield; and great-grandchild: Harper Sayegh. In addition to his parents, he was preceded in death by wife, Dolores Jean (Nicholson) Satterfield, and brother, Raymond Satterfield. In keeping with his wishes, Ronnie will be cremated without service or visitation.

The family of Ronald "Ronnie" L. Satterfield created this Life Tributes page to make it easy to share your memories.