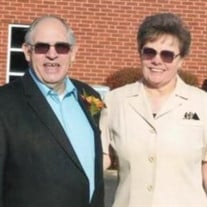 Ronald David and Marion Lou Richardson Utt, passed away on Saturday, September 25, 2021, and Sunday, September 26, 2021. Ron was the son of the late James Wesley and Edna Pearl Fox Utt. Marion was the daughter of the late John Leslie and Florence Mabel Raines Richardson. They were both faithful members of the First Church of the Nazarene. Ron was a welder and mechanic by trade and Marion graduated from Glenville State with a degree in Education specializing in Special Education, later obtaining her Masters degree in communication from Fairmont State University. Ron was a retired mechanic from Martinka Mines and later Weyerhaeuser Company. Ron was an avid outdoorsman and devout family man. Marion was a retired teacher from Marion County Board of Education and founder of Written Word Ministries, an outreach dedicated to showing the love of Jesus to her community. She also enjoyed teaching Sunday School classes. Ron and Marion’s greatest joys in life were Jesus, each other, and their family. They are survived by their loving sons, Ronald Utt and his wife, Charli and David Utt and his wife, Cindy; Ron is survived by one brother, Darrell Keith Utt and his wife, Olive of Shinnston; his sister, Patricia Green of Webster Springs; Marion is survived by three brothers, John Edwin Richardson and his wife, Chris of Spencer, twin brother, Michael Richardson and his wife, Eileen of Spencer, and Larry Richardson and his wife, Lynetta of Oregon; one sister, Carol Staats of Parkersburg; their grandchildren, Erika Ushendibaba and her husband, Tatenda, Leslie Utt, Joshua Utt, Shawn Utt, John Utt, Natalie Utt and Josiah Utt. In addition to their parents, Ron was preceded in death by a sister, Linda Campbell, and a brother in infancy; Marion was preceded in death by her brother-in-law, Bob Staats. Family and friends are welcome to call at Fairmont First Church of the Nazarene, 1604 Morgantown Ave. Fairmont, on Saturday, November 13, 2021, from 10:00 a.m. until the time of the memorial service at 1:00 p.m. with Pastor Scott King, officiating. Inurnment will follow at Mt. Zion Cemetery.

The family of Ronald David and Marion Lou Utt created this Life Tributes page to make it easy to share your memories.