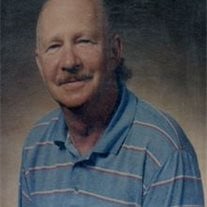 Roger Stahl Roger C. Stahl,71, son of the late Walter and Clara Stahl began his journey with the Lord on December 23, 2009 after a short battle with cancer. He was born in Fairmont on October 23, 1938. He graduated from Fairmont Senior High School and served in the United States Army at Fort Knox Kentucky. Roger was employed for 26 years with Galis Corporation/ FMC. Following an early retirement, due to illness, Roger became an avid train collector. He enjoyed hunting and fishing, riding his four-wheeler, feeding the deer and birds and shooting trap. He also enjoyed watching wrestling. Roger attended the Tri-city Church of God. He is survived by his loving wife of 46 years, Carolyn Miller Stahl; his children, David Burr of Huntsville, Texas, Pastor Melinda Suplita and her husband John of Fairmont, Joe Burr and his wife Kristy of Fort Worth, Texas and Christopher Stahl and his wife Holly of Wheeling; his very special grandchildren, Jezzeriah Fulaytar and her husband, Joshua of Fairmont, Heather West and her husband Timothy of Cape Charles, Virginia, Jeremy Burr of Forth Worth, Justin Thrasher of Fort Worth, Shannon Burr of North Carolina, Christina McCarty of Mannington and Joseph Stahl and Trevor Stahl both of Wheeling; his great grandchildren, Joshua, Nathaniel, Emma and Auria Fulaytar of Fairmont, Ethan, Mia and Jordin West of Cape Charles, Jayda Burr of Fort Worth and Kayleigh McCarty of Mannington; three nieces, Carla Cottrell of Fairmont, Katherine Wagner of Fairmont and Mary Wagner of Fairmont; a great niece, Stephanie Cottrel; a sister-in-law and long time friend, Sharlet Bell and a valued friend and shooting buddy, Richie Toothman. In addition to his parents, Roger was preceded in death by his beloved sister, Nancy Stahl Wagner who began her journey with the Lord on December 22, 2009. Friends may call at the Carpenter & Ford Funeral Home, 209 Merchant Street, Fairmont on Saturday from 5pm to 8pm and Sunday Noon to 2pm. The funeral service will be at 2pm on Sunday, December 27, 2009 at the funeral home with Pastor Melinda Suplita officiating. Interment services will follow at Grandview memorial Gardens with full military services provided by the Marion County Veterans Council Military Honor Guard. Condolences may be sent to the family at www.carpenterandford.com

Roger Stahl Roger C. Stahl,71, son of the late Walter and Clara Stahl began his journey with the Lord on December 23, 2009 after a short battle with cancer. He was born in Fairmont on October 23, 1938. He graduated from Fairmont Senior High... View Obituary & Service Information

The family of Roger C Stahl created this Life Tributes page to make it easy to share your memories.