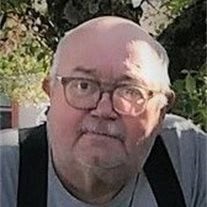 Roger Lee Plyman, 64, of Fairmont passed away on Monday, April 30, 2018 as a result of an automobile accident. He was born in Fairmont on August 4, 1953, a son of the late Russell Lee Plyman and Maxine Elizabeth (Buckhanan) Plyman. Roger is survived by his loving wife of 43 years, Josie Ann (Green) Plyman; his son, Roger Lee Plyman and his wife Karrie of Fairmont; two daughters, Jessica Lynn Plyman-Harr and Jessalyn Porsche Fielder -Plyman and her good friend John Herrera; and his grandchildren, Mackenzie Plyman, Johnpaul Plyman, Colin Plyman, and Errolynne Braxton Plyman. Also surviving are his brothers-in-law John Savonarola of Fairmont, John Edward Green and his wife Mary Jo of Mannington, and Alan Fluharty, also of Mannington; sisters-in-law Susan Morehead and her husband Jerome of North Carolina, and Lisa Deems and her husband Jay of Shinnston; a close friend Ronnie Utt and several nieces and nephews. In addition to his parents, he was preceded in death by his sister, Carol Savonarola, and a sister-in-law, Kimberly Fluharty. Roger retired from Novelis (Alcan) with 42 years of service. He previously worked at Westinghouse Electric for three years. He was a member of the United Steel Workers, Local #1. Roger was a 20-year volunteer for the Marion County Rescue Squad and was a graduate of the 2nd EMT Class, 1972-1992. He served as a volunteer fire fighter for the Winfield Volunteer Fire Department from 1970-1992. Roger was a member of the Central Christian Church in Fairmont. He enjoyed spending time with the grandchildren, gardening, cooking and going to auctions. Friends and family will remember Roger as a story teller and jokester. Friends and family will be received at the Carpenter & Ford Funeral Home, 209 Merchant Street, Fairmont on Thursday from 1 pm to 8 pm and on Friday from 10 am to 11am. The funeral service will be held at 11:00 a.m. on Friday, May 4, 2018 at the funeral home with Rev. Robin Norsworthy officiating. Interment services will follow at Beverly Hills Memorial Gardens.

Roger Lee Plyman, 64, of Fairmont passed away on Monday, April 30, 2018 as a result of an automobile accident. He was born in Fairmont on August 4, 1953, a son of the late Russell Lee Plyman and Maxine Elizabeth (Buckhanan) Plyman. Roger is... View Obituary & Service Information

The family of Roger Plyman created this Life Tributes page to make it easy to share your memories.

Roger Lee Plyman, 64, of Fairmont passed away on Monday, April...