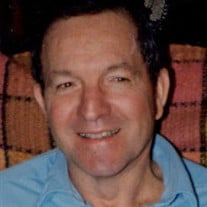 Robert Edward Tonkery, 91, of Sandusky, Ohio, formerly of Fairmont, passed away on Thursday, July 25, 2019. He was born on March 06, 1928, in Fairmont, a son of the late Robert C. Tonkery and Mildred Stella (Fortney) Tonkery. After graduating from high school, Robert went on to serve his country in the United States Army National Guard. He later went on to work for the U.S. Post Office, as a carrier and a clerk; he was a dedicated pilot (who flew a plane before he drove a car), the last original member of the Trinkling Springs Hunting and Fishing Club, and will be remembered for his love of gardening, family, friends, and neighbors. Robert is survived by his wife, Betty Ilene Tonkery. He is also survived by his sons, Mark Tonkery and wife Nancy, of Grafton and Matthew Tonkery and wife Dianne, of Bridgeport; daughters, Pamela Boylen and husband Alan, of Fairmont, Patricia McDougal and husband David, of Fairmont, and Paula Glasscock and husband Jimmy, of Bridgeport; brother, Bill Tonkery, of Fairmont; sisters, Catherine Little and husband Tom, of Fairmont, and Mary Ann Smith, of California; and many loving grandchildren, great-grandchildren, and great-great grandchildren. In addition to his parents, he was preceded in death by his first wife, Maxine Ruth (Patton) Tonkery; daughter, Peggy Miller; son-in-law, Noah Miller Jr.; and brother-in-law, Lloyd Smith. Family and friends are welcome to Carpenter and Ford Funeral Home, 209 Merchant St., Fairmont, on Monday from 2 p.m. – 8 p.m. and at Whitehall Church of Christ, 3546 Fairmont Ave, Fairmont, on Tuesday from 12 p.m. – 1 p.m., with services being held at the church on Tuesday, July 30, 2019 at 1:00 p.m. with Evangelist Kevin Lough officiating. Interment will follow at Beverly Hills Memorial Gardens.

Robert Edward Tonkery, 91, of Sandusky, Ohio, formerly of Fairmont, passed away on Thursday, July 25, 2019. He was born on March 06, 1928, in Fairmont, a son of the late Robert C. Tonkery and Mildred Stella (Fortney) Tonkery. After graduating... View Obituary & Service Information

The family of Robert Edward Tonkery created this Life Tributes page to make it easy to share your memories.