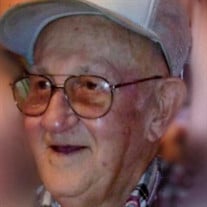 Heavenly angels are welcoming Robert Lynn Capet our loving Father, Grandfather, Great Grandfather at the pearly gates where he will begin his eternal life with his precious loved ones who has gone on before him. He has said …. “I lived a good life.” It started on September 28, 1928, when he was born in Fairmont to his parents, Mable Laura Dumire Capet and Eugene Capet. He was the youngest of his siblings and the last surviving of them. He had one brother, Samuel “Sam” and four sisters, Delores, Betty, Mary, and Mabel “Tootsie. Robert was a 1947 graduate of Farmington High School. He proudly served his country starting in 1952 in the United States Army in the 11th Airborne division 544th Field Artillery in Fort Campbell, Kentucky as a communications Corporal. Robert first married Virginia Rose Bunner Capet who passed in 1982 and upon her death and a number of years later he married our sweet dear mother, Loretta Joyce Greathouse Capet. He had no children in his first marriage but inherited a large readymade family with his second wife Joyce. He got three daughters, Joyce Locke of Fairmont, Patricia Parsley (deceased), and Marsha Fluharty (Mac) of Monongah; three sons, Frank Symenski and his wife, Debbie of South Carolina, Jim Symenski (Deceased) and John Symenski and his wife, Sharon of Colfax. Grandchildren, Linda and her spouse, Bill McCullough of Monongah, Lori Morris (deceased), Christy Hamilton of Butler, Pa, Staci Symenski of South Carolina, Ashley Villers, Derrek and (Mary) Swearingen of Colfax and Brandon and Susan Greynolds of Virginia, Tammy Zogran (Rob) of Fairview and Lisa Hayes of Fairmont, Jimmy Symenski of Fairmont, Brandy Fluharty of Fairmont, Jesalyn (Mark) Kamaka of Monongah, and Fred Fluharty of Montana Mines and Heather Pellegrini also of Montana Mines; many nieces, nephews and a special brother-in-law, Gordon (Bud) Ralphsnyder now deceased. Robert’s working career started as a young boy in a grocery store (meat dept butchering). One thing that he was proud of was he never had to seek out work. Employers sought him out. His good work ethics followed him, and he never even interviewed. When asked by a potential employer his name, he would tell them, and they would say you are hired when can you start? He worked for the same company as they changed owners and names for over 45 years as a welder/ fabricator and retired in 1991. The company was Fairmont Machinery/Galis/FMC and EIMCO, final name was Ruskins. Robert was a faithful servant of God until his illness. He was a member of Mt. Harmony Community Church. He loved wood working, gardening, camping at Big Bear and some traveling with friends. Robert will be sorely missed and live on in the hearts of his children. We all Join together in saying “Thank you for being our Dad.” A special thanks to Amedysis Hospice and the special nurses, Cortney, Angie and Corina. Family and friends may call at Carpenter and Ford Funeral Home, 209 Merchant St., Fairmont, on Monday, July 26, 2021, from 1:00 – 8:00 p.m. and on Tuesday, July 27, from 10:00 a.m. until the time of the funeral service at 11:00 a.m., in the funeral home with Pastor Ruth Hall officiating. Interment will follow at Monumental Cemetery, where military honors will be accorded by the Marion County Veterans Council Military Honor Guard and the U.S. Army Camp Dawson Honor Guard.

Heavenly angels are welcoming Robert Lynn Capet our loving Father, Grandfather, Great Grandfather at the pearly gates where he will begin his eternal life with his precious loved ones who has gone on before him. He has said &#8230;. &#8220;I... View Obituary & Service Information

The family of Robert Lynn Capet created this Life Tributes page to make it easy to share your memories.