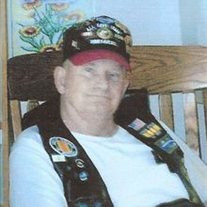 Robert Long Robert”Bob” Lee Long, 64, of Fairmont passed away on Saturday, March 26, 2011 at the Louis A. Johnson Veterans Administration Medical Center in Clarksburg. He was born at Four States on July 18, 1946 a son of the late George E. Long and Sarah Elizabeth (Blake) Long Eckles. Bob is survived by his loving and devoted wife of 43 years, Barbara Sue (Carpenter) Long. The couple were married on December 6, 1967. Bob attended Monongah High School. He served in the US Army and was a much decorated veteran of the Viet Nam War, serving in 1968-1969. He was awarded the combat Infantry Badge, Air Medal, Bronze Star, Purple Heart and Amy Commendation Medal. Bob was a life member of the Purple Heart. The VFW Post 9916 of Westover, The Viet Nam Veterans of American and a proud member of the Morgantown Military Honor Guard. He retired from Valley General Contracting, due to illness. Prior to that he had worked a FMC, Mountaineer Resources, Dick Coal and J O Lively. His many interest included fishing, hunting, camping, working in his yard and vacations at the beach. Bob was a devoted husband, loving father and grandfather. In addition to his wife, he is survived by his sons, Robert Lee Long, Jr. and his wife Leona Marie of Fairmont and Chad Eric Long also of Fairmont; his very special grandchildren, Landyn Timothy, who was the love of his life, his little man and Brooklyn Ann, who was his pride and the children’s mother, Ashley, who was also special in his life. Also surviving are his brothers, Charles Long and his wife Janice of Fairmont and James H. Long of Farmington; a sister, Marie Huey of Worthington; brothers-in-law and sisters-in-law, Walter and Doris Carpenter, George Robert and Ava Bryan Carpenter, Robert Lee and Ethel Benson, John W. and Karen Carpenter and Lewis Heston; several aunts, uncles, cousins, nieces and nephews, especially Leonard and Sharon Lockhart. In addition to his parents, Bob was preceded in death by the following brothers and sisters and their spouses, Mary Louise and Leonard Lockhart, Sr., Grandville “Bill” and Pearl Long, Donna and John Van Pelt, George Long, Jr. and John Huey and a sister-in-law, Lillie Heston. Friends and family may call at the Carpenter & Ford Funeral Home, 209 Merchant Street, Fairmont on Monday from 1pm to 9pm and Tuesday 11am to 1pm. The funeral service will be at 1pm on Tuesday with Pastor Donna Carpenter Taylor officiating. Interment will follow at Mt. Zion Cemetery with full military honors conducted by the Westover VFW and Morgantown Military Honor Guard. Robert’s family would like to extend a special thanks to his wonderful doctors, Dr. Asmus, Dr. Jain, Dr. Horner at the Veterans Administration Hospital in Clarksburg. Thanks also to the nurses and staff who took wonderful care of him for two years. He thought of them as family. Online condolences may be sent to the Long Family at www.carpenterandford.com.

Robert Long Robert&#8221;Bob&#8221; Lee Long, 64, of Fairmont passed away on Saturday, March 26, 2011 at the Louis A. Johnson Veterans Administration Medical Center in Clarksburg. He was born at Four States on July 18, 1946 a son of the late... View Obituary & Service Information

The family of Robert Bob Long created this Life Tributes page to make it easy to share your memories.