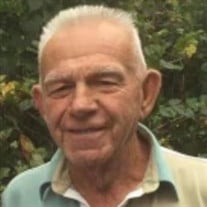 Robert “Bob” Owen Jones, 80, of Morgantown, passed away on Monday, December 27, 2021, at Sundale Nursing Home, surrounded by his loving family. He was born June 25, 1941, in New York, NY; the son of the late Russell Jones and Alberta (Austin) Jones. Bob was an U.S. Army Veteran and served during the Korean War. He was a retired Lieutenant Police Officer for 27 years for the City of Fairmont. Bob also was the owner and operator for Jones and Sons Recycle Company. He was a member of the Willow Tree Church, Scottish Rite, Fairmont Masonic # 9 A.F. & A. M., and the Osiris Shriner Center. Bob is survived by his wife of 58 years, Alice (Arnett) Jones of Morgantown; his daughter, Crystal Nantz and her husband, Eric of Morgantown; his son, Russell Vance Jones and his wife, Susan of Conway, S.C.; his grandchildren, Sara Nantz, Payton Jones, and Jocelyn Jones; his sisters, Barbara Moore and her husband, Tom of Joe Town, and Rosemarie Copen of Florida; several nieces and nephews. In addition to his parents, Bob was preceded in death by his brother-in-law, John Copen. A graveside service will be held at Arnettsville Cemetery on Thursday, January 6, 2022, at 1:00 p.m. with Pastor Stephen Dodrill, officiating. A graveside Masonic rite will be conducted by the A.F. & A. M. Lodge # 9. Military Honor will be conducted by the Marion County Veterans Council Military Honor Guard and the U.S Army reserve from Camp Dawson. Family and friends are welcome to attend at the Goshen Baptist Church, 1070 Goshen Road, Morgantown on Friday, January 7, 2022. from 6:00 p.m. until the time of the Celebration of Life at 7:00 p.m. The Jones Family would like to thank the workers at Harmony Memory Care Unit for the wonderful care that was given to Bob.

The family of Robert "Bob" Owen Jones created this Life Tributes page to make it easy to share your memories.