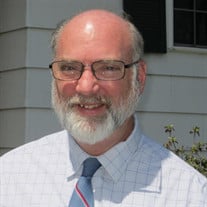 Richard L. Ward, Jr. Obituary Richard Leo Ward, Jr. was born in Baltimore Maryland on March 13th, 1956. He was promoted to glory, November 19, 2021. Rick was the first of five children born to Ruth & Richard L. “Dick” Ward, Sr. born within eight years. From infancy he knew the Holy Scriptures and his parents faithfully raised Rick and his two brothers and two sisters—Keith, Steve, Sue, and Beth - in the nurture and admonition of the Lord. Rick inherited a love for music and a rich, baritone voice from the Young side of the family. He learned to play trumpet and trombone, which he played in marching band at Perry Hall High School and continued to serenade his family with an occasional trombone solo to the delight of his children throughout his life. Upon graduating high school Rick enlisted in the U.S. Air Force Reserves in which he served for six years. Shortly after being honorably discharged as a Staff Sergeant at Dover Air Force Base he began dating a young woman from church. Rick and Josephine “Jody” Cauthorn were married on December 20th, 1986—they would soon have celebrated 35 years of marriage. Rick and Jody enjoyed attending classical and Christian music concerts, singing duets and choral music at church, and attending plays and church events. Due to the arts bug that infected their son, Reuben, Rick even took to the stage several times, jovially attempting to master ballet waltzes in The Nutcracker. In 1988 Rick and Jody were blessed with a son, Edmund Richard. He was followed by Reuben Elliot in 1991, Jethro Daniel in 1994, Josephine Sandra “Josie” in 1999, & Gabriel Peter “Gabe” in 2001. During these years Rick faithfully and cheerfully supported his family, raising them to know and serve the Lord. He shared his love of music with his children, providing music lessons and encouraging them to praise the Lord in song. He taught the boys practical skills in home maintenance and repair, the rewards of hard work, and always made time for family vacations on shoestring budgets. His ethic of hard work enabled Jody to homeschool their five children. In 2013 Rick and Jody began a 40 Days for Life campaign in Baltimore. This led to the founding of a pregnancy resource center and other ministries in the following years. In 2021 Rick decided to begin a new adventure with Jody and the two youngest children and moved his family to West Virginia. He was blessed to be hired again in his field and was very excited to do land survey work once again. Rick is survived by his wife Josephine (nee Cauthorn) “Jody,” his sons; Edmund (his wife, Sarah), Reuben, Jethro (his wife, Joselin), Gabriel; his daughter, Josie; three grandsons, Matthias, Wesley & Justin; his father, Richard L. Ward, Sr.; his brothers, Keith and Steve; and his sisters, Sue Wittmen and Beth Engles. Rick would want all to know that physical death is not the end. Heaven and Hell are real. He would want you to know that, because Jesus Christ took the wrath of God against sin on the cross, you can be freed from sin's penalty and have eternal life in Heaven, where every tear will be wiped away. “For God so loved the World that whoever believes in [Jesus] shall not perish but shall have eternal life…this is eternal life: that they may know You, the only true God, and Jesus Christ, whom you have sent.” John 3:16;17:3

The family of Richard Leo Ward Jr. created this Life Tributes page to make it easy to share your memories.