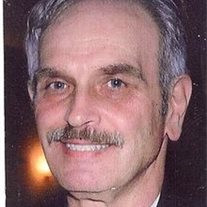 Richard “Rick” Dane Kolozy Richard “Rick” Dane Kolozy (62) of Grant Town, WV passed away at home unexpectedly Saturday January 30, 2010. He was born November 16, 1947 at Fairmont General Hospital Fairmont, WV to the parents of Frank and Ethel Kolozy of Grant Town, Frank and Ethel proceeded him in death along with two brothers Frank Kolozy Jr. of Colorado and Raymond of Ohio and one sister Dorothea “Dottie” Kolozy-Colasessano of Fairmont. Several nieces and nephews survive with one special nephew Nick Colasessano from Fairmont along with wife Dee and sons Mike and Phil. He attended Grant Town Grade School and Fairview High School where he graduated in 1965. He loved sports. He started Fairmont State College and got drafted to the Vietnam War where he served in the U S Army from March 1969 to January 1971. While serving he achieved the Bronze Star, Army Commendation Medal and Air Medal with an honorable discharge. After serving in Vietnam and returning home he attended and graduated from Salem College in1974 with a Bachelors Degree in Business and a minor in History. In addition, he served five years in the Army Reserve in Fairmont. While attending Salem College he met and married Debbie Dunfee-Kolozy his wife on March 10, 1973. They have two wonderful daughters Krystal Kolozy-Crider of Rivesville and Karri Kolozy-Hayhurst along with there husbands Roy Crider and Ryan Hayhurst. He had one grandson whom he adored Tucker Hayhurst, and referred to him as his “little dinosaur”. His jobs included Reserve Life Insurance Sales agent and Sosmetal Auto Parts also International Coffee Service. Then he became disabled. Rick enjoyed his family, precious pets and having family dinners, going to the VFW Post #629 where he was a life member. He was also a member of the American Legion. He had a passion for reading and writing. Friends and family may call at the Carpenter & Ford Funeral Home, 209 Merchant Street on Wednesday from 1pm to 9pm. The funeral service will be at 10am on Thursday, February 4, 2010 at the funeral home with Pastor Randy Vincent officiating. Interment services will follow at Beverly Hills Memorial Gardens with Full Military Honors conducted at graveside by the Marion County Veterans Council Honor Guard. Online condolences may be sent to the Kolozy Family at www.carpenterandford.com

The family of Richard Dane Kolozy created this Life Tributes page to make it easy to share your memories.