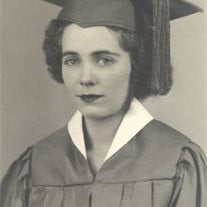 Rella Mamie Simmons Tucker, 78, of Upper Pricketts Creek, Fairmont passed away on Wednesday, July 15, 2009 at John Manchin Sr. Health Care in Fairmont. She was born on August 10, 1930 at Valley Head a daughter of the late Allman Amos Simmons and Lucy Ann Channell Simmons and step daughter of Rose Ware of Valley Head. Rella graduated from East Fairmont High School in 1948. She attended the Eldora United Methodist Church for many years and later transferred to the Winfield United Methodist Church. Rella was employed at various locations in Fairmont including W T Grants and Watson’s, where she was the Manager of the Shoe Department. She was last employed at Thrift Drug as a retail clerk. Rella was fond of making ceramics and enjoyed camping and flower gardening. In addition to her step mother, she is survived by her loving husband of 59 years Donald Gene Tucker; her sons Dennis K. Tucker and his wife Joyce of Verona, Virginia and Kevin Tucker and his wife Judy of Scottsville, Virginia; her daughter Donna Patrick and her husband James of Fairmont; two brothers Reverend Verl Simmons and his wife Carolyn of Valley Head and Arnett Simmons of Valley Head; her sister Edna Butcher of Lost Creek; her grandchildren Stephanie Henthorn and her husband Greg, Greg Tucker and his wife Charlotte, Matthew Rush and his wife Autumn, Ashley Rush, T J Tucker and Anna Tucker; her great grandchildren Hunter Rush, Anthony Tucker, Owen Henthorn, Paiden Tucker, Elayna Bonnett, Deegan Rush and Eva Henthorn. In addition to her parents, she was preceded in death by her brother Troy Simmons; her three sisters Myrtle Gay, Ruth Channell and one who passed away in infancy. Friends and family may call at Carpenter and Ford Funeral Home, 209 Merchant Street, Fairmont on Friday from 1:00pm to 9:00pm. Services will be held at the funeral home on Saturday, July 18, 2009 at Noon with Pastor Bob Barker officiating. Interment services will immediately follow at Beverly Hills Memorial Gardens in Westover. Online condolences may be sent to the Tucker Family at www.carpenterandford.com.

The family of Rella Mamie (Simmons) Tucker created this Life Tributes page to make it easy to share your memories.