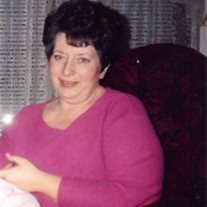 Rebecca “Becky” Smith Rebecca Ann Satterfield Smith, 61, of Monumental Community passed away on Friday, November 27, 2009 at Ruby Memorial Hospital. She was born on March 29, 1948 in Fairmont a daughter of the late Henry Donald “Don” and Eleanor Pauline Price Satterfield. She was a loving mother, grandmother and homemaker. She loved animals especially her cats and dogs. She was a member of the Valley Chapel United Methodist Church. She graduated from East Fairmont High School in 1966 and worked at the Westinghouse Glass Plant for a few years before starting her family. Becky enjoyed camping with her family at Holly River State Park and Big Bear Lake. She was also fond of vacationing at Walt Disney World with family. She is survived by her loving husband Otis E. Smith of Monumental; her devoted daughters Michelle Phillips and her husband Daniel of Fairmont and Jennifer Riggs of Fairmont; a brother Donald Satterfield and his wife Barbara of Fairmont; a sister Shirley Collins of Fairmont; four very special grandchildren Alayna Phillips, Cheyenne Phillips, Tristan Riggs and Garrett Riggs; brothers-in-law and sisters-in-law Annie and Wayne Musgrave of Baxter, Ann Smith of Morgantown, Frank and Vera Smith of Rivesville, Pearl and Jim Yost of Hagans; June and Kenny Kovack of Rivesville and Chuck and Diane Smith of Farmington; several aunts, uncles nieces, nephews and cousins. In addition to her parents she was preceded in death by a nephew and niece that she was especially close to, Kenny Joe Kovack and Tina Kovack, who fondly called her “Aunt B.”; a brother-in-law David Lee Smith; a sister-in-law Ethel Robison; and a special aunt Winnie Christman. Friends may call at the Carpenter and Ford Funeral Home, 209 Merchant Street on Monday from 2p.m to 8p.m. and Tuesday from 11 a.m to 1 p.m. Funeral services will be held at the funeral home on Tuesday, December 1, 2009 at 1:00 p.m. with Pastor Jim Zinn officiating. Interment services will follow at Grandview Memorial Gardens. Online condolence may be made to the family at Carpenterandford.com

The family of Rebecca Ann Smith created this Life Tributes page to make it easy to share your memories.