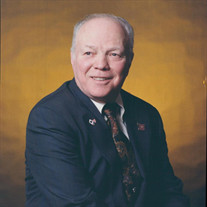 Raymond “Dean” Rogers, 85, of Fairmont, passed away on Thursday, April 28, 2022, at his residence, surrounded by his loving family. He was born on September 26, 1936, in Fairmont; a son of the late Raymond Rogers and Hallie Lee (McVicker) Rogers. Raymond graduated from East Fairmont High School in 1954. He was a U.S. Navy Veteran serving during the Korean War. He retired from Alcan Aluminum as the Maintenance Supervisor after 30 plus years of service. Raymond attended Samaria Free Methodist Church. He was a member of the Masonic Lodge in Fairmont. Raymond enjoyed golfing, fishing, hunting, and going to West Virginia basketball and football. Raymond is survived by his loving wife of 30 years, Patsy (Bartlett) Rogers of Fairmont; his daughters, Deanna Rose Niechwiadowicz and her husband, John of Schnecksville, Pennsylvania; Theresa Krall and her husband, Frank of Perryopolis, Pennsylvania, and Melanie Welch and her husband, Jason of Friendsville, Maryland; his stepchildren, Ronald Moran of Grafton, Stephanie Floyd and her husband, Elmer of Aurora, Kimberlee McDougal and her husband, Mark of Grafton, and Brent Moran and his wife, Jennifer of Grafton; his grandchildren, Erik, Hallie, Meagan, and Cory; ten step grandchildren and eighteen step great grandchildren; his brothers, Dale Alan Rogers and his wife, Judy C. of Fairmont, and Richard McVicker Rogers and his wife, Patricia of Fairmont; his sister, Grace Morris and her husband, Tom of Fairmont; his brother -in-law, Frank Coakley; his canine companion, Smoke; several nieces and nephews. In addition to his parents, Raymond was preceded in death by his son, Raymond Dean Rogers II; and his sister, Diana Lee Coakley. Memorial contributions may be made to Samaria Free Methodist Church, 792 Pricketts Creek Road, Fairmont, WV 26554 or Amedysis Hospice, P.O. Box 366, Anmoore, WV 26323. Family and friends are welcome to call at Carpenter and Ford Funeral Home, 209 Merchant St., Fairmont, on Sunday from 2:00 – 8:00 p.m., and on Monday, May 2, 2022, from 10:00 a.m. until the time of the funeral service at 11:00 a.m., at the funeral home, with Pastor Steve Stemple, officiating. Interment will follow at West Virginia National Cemetery, where military rites will be accorded by the U.S. Navy Honor Guard and Marion County Veterans Council Military Honor Guard. Condolences and memories may be shared with the family online at www.carpenterandford.com.

The family of Raymond Dean Rogers created this Life Tributes page to make it easy to share your memories.

Raymond “Dean” Rogers, 85, of Fairmont, passed away on Thursday,...