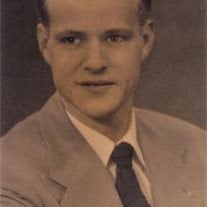 Raymond Lewis Raymond Earl Lewis, 84, of Fairmont passed away Tuesday, September 27, 2011 at the Arbors at Fairmont. He was born in Fairmont on March 18, 1927, a son of the late Wayman Earl and Elssie Gay (Merrill) Lewis. Raymond proudly served his country with the United States Navy during World War II as a 3rd Class Petty Officer on the USS Colorado and on the USS Knapp. He was retired from Owens Illinois Glass Plant in Fairmont. Following his retirement from Owens, he was employed at Fairmont State University as a campus security police officer for 12 years and most recently as a courier at Huntington Bank. He attended the Viola Church and the Christian Missionary Alliance Church, helping with the church yard sales. He was a life member of VFW Post #629 and a member of the Fairmont American Legion. He enjoyed watching parades and visiting with family and friends. Family and friends will remember Raymond for his passion for yard sales, which he regularly participated in for over 30 years. He is survived by his loving wife, Wilma (Dennison) Lewis of Fairmont, four sons, Kenneth Wayne Lewis and his wife Linda of Grafton, David Earl Lewis of Wallace, Robert Eugene Lewis and his wife Teresa of North Carolina and Randy Eric Lewis and his wife Kristy of Grafton, two daughters, Rhonda Kay Lewis of Fairmont and Linda Darlene McClung of Fairmont, 15 grandchildren, Bryan Lewis, Charyl Lewis, Stephanie Lewis, Melissa Lewis, Candace Lewis, Robert Lewis, Amy Lewis, Anna Lewis, Erika Lewis, Alex Lewis, Christopher Lewis, Randy McClung, Connor McClung, Ebb McClung, and Zakkari White, and also 1 great-grandchild. Also surviving are three sisters, Doris Griffith of Weston, Lorraine Whitehead and her husband Bill of Pt. Pleasant and Rebecca Lipps of Parkersburg. In addition to his parents, he was preceded in death by his twin brother, Wayman Burl Lewis and a son, Richard Earl Lewis, who died in infancy. Family and friends may call at the Carpenter and Ford Funeral Home, 209 Merchant St., Fairmont on Thursday from 1-8 pm and on Friday from 10-11 am. The funeral service will be held in the funeral home on Friday, September 30, 2011 at 11 am with Dr. Earl W. Klein officiating. Interment will follow at Grandview Memorial Gardens where full military honors will be conducted by the Marion County Veterans Council Honor Guard. Online condolences may be left for the family at www.carpenterandford.com

Raymond Lewis Raymond Earl Lewis, 84, of Fairmont passed away Tuesday, September 27, 2011 at the Arbors at Fairmont. He was born in Fairmont on March 18, 1927, a son of the late Wayman Earl and Elssie Gay (Merrill) Lewis. Raymond proudly... View Obituary & Service Information

The family of Raymond Earl Lewis created this Life Tributes page to make it easy to share your memories.