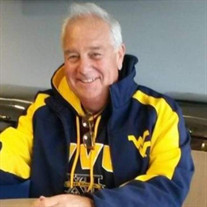 Randy Allen Sheets, 71 Montana Mines resident, Randy Sheets succumbed to a long batter with cancer on February 23, 2022, surrounded by his family. Randy was born September 30, 1950, to the late James “Bucky” Sheets and Nova Mae (Snider) Henderson in Fairview, WV. He grew up throughout West Virginia and met the love of his life Debbie Swiger in the 7th grade at East Park School. The proud Vietnam Veteran (Army) called Marion County home until moving to Annapolis, MD for a job promotion. Randy worked as a National Account Service Manager for AT&T, a Project Manager for Lucent Technologies & Avaya. Throughout his successful career, he furthered his education earning certifications at George Washington University and the Massachusetts Institute for Technology. The couple retired to Coastal NC to spend time with their treasured Aunt & Uncle, Phyllis Jean of Bridgeport, and Carlos Monday (deceased). Randy continued his pursuit of success by starting a Project Management business supporting his valued colleagues at Comcast. He loved attending WVU Football games where he and Debbie hosted tailgating events. They made many friends in the Blue Lot and while traveling throughout the country supporting the Mountaineers. Randy will be greatly missed by his children Carla Sheets and Randy Allen II and his wife Jennifer, their three children, Maddison, Randy Allen III and Samantha. He is survived by his mother and stepfather Nova and Ronnie Henderson of Fairview, WV brothers Rick Sheets and wife Karen of Elkins, WV and Bill Sheets and wife Michelle of Fairmont, WV, Jeff Sheets and wife Michelle of Athol, ID, brother-in-law Paul Swiger and wife Sandra, sisters in law Judy (and James) Manning of Jacksonville, FL, Karen Leonard and Cindy Sheets of Fairmont as well as many cousins, nieces and nephews who he loved dearly. In addition to his wife and father, he was preceded in death by his brother Ronald Lee Sheets, his mother-in-law Dorothy Swiger both of Montana Mines, WV and his brother-in-law, Bradley Swiger of Nancy, KY. The Randy Sheets family will meet at Carpenter and Ford Funeral Home, 209 Merchant St., Fairmont on Friday, May 6, 2022, at 1:00 p.m. to go in procession to WV National Cemetery. A graveside service will be held at the West Virginia National Cemetery in Grafton on Friday, May 6, 2022, at 2:00 pm. A Masonic Services will be conducted by the AF & A Masons Masonic Lodge # 9 of Fairmont. Full military honors will be conducted by the Marion County Veterans Council Military Honor Guard and the U.S. reserve from Camp Dawson. He will be interred with his wife. A celebration of his life and their rejoining will be held immediately following at the Morgantown Marriott at Waterfront Place. In lieu of flowers, please consider making a donation to Operation Welcome Home – job placement for WV Veterans.

The family of Randy Allen Sheets created this Life Tributes page to make it easy to share your memories.