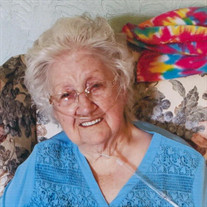 Phyllis Irene Baker Wilson, 95, of Fairmont (Watson) passed away on Saturday, May 1, 2021 at United Hospital Center, under the care of WVU Medicine Hospice. Her two daughters were by her side. She was born April 23, 1926 in Hopewell Community (Fairmont), daughter of the late Oregon Nelson Baker and Nancy Ida Reeves Baker. She was married to Raymond L. Wilson from November 10, 1950 until his death on April 19, 1994. Phyllis had worked at Westinghouse from 1945 until 1953 and then became a homemaker and mother. She enjoyed cooking and gardening, especially flowers, and being a wonderful Mother to her children. She also enjoyed working in her word search books and watching her western shows on TV. She loved Country and Gospel Music, and she especially enjoyed getting visitors. She is survived by three children: Debra (Debbie) Wilson, Fairmont, with whom she has resided since 2017: Roger Wilson of Grafton, and Crystal Wilson of Fairmont and Mark Taylor, fiancée. Two granddaughters: Megan Wilson of Fairmont and Courtney Wilson and Josh Baker, fiancée, of Grafton. Four great grandchildren: Kissiah Riggin, Arianna Riggin, Harper Baker and Joshua Baker: one Brother, Nelson Baker and wife Frances of Granville; Two sisters in law: Madalee Wilson and Mary (Peaches) Baker, both of Fairmont. She had many nieces and nephews, some of whom are deceased) Special friends: Terry Crouso of Fairmont: Wendy Printy of Bruceton Mills and Ginger Harbert, caregiver, of Fairmont. Also special thanks to the staff at UHC and the WVU Medicine Hospice care workers and Dr. Davis. In addition to her parents and husband, Phyllis was preceded in death by four sisters: Ruth Kittle, Bernice Wyer, Maxine Boyce, and Lucille Davis and one brother, Dallas Baker; mother-in-law Alice Wilson of Dakota and daughter in law, Sandy Wilson of Grafton. In lieu of flowers, donations can be made to the WVU Medicine Hospice Program at United Hospital Center. Family and friends are welcome to call at Carpenter and Ford Funeral Home, 209 Merchant St., Fairmont, on Monday from 2:00- 8:00 p.m. and on Tuesday, May 4, 2021 from 10:00 a.m. until the time of the funeral service at 11:00 a.m., at the funeral home, with Pastor Larry Barkley, officiating. Interment will follow at West Virginia National Cemetery.

Phyllis Irene Baker Wilson, 95, of Fairmont (Watson) passed away on Saturday, May 1, 2021 at United Hospital Center, under the care of WVU Medicine Hospice. Her two daughters were by her side. She was born April 23, 1926 in Hopewell Community... View Obituary & Service Information

The family of Phyllis Irene Wilson created this Life Tributes page to make it easy to share your memories.