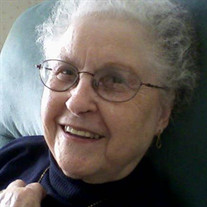 Phyllis Christine “Chris” VanGilder, 92, returned to her heavenly home on August 31, 2018 after a valiant struggle with Alzheimer’s disease. Her devotion to family and very strong belief in God supported her throughout life and ultimately gave her peace. Christine was born to the late Clyde J and Zella (Turner) Vandergrift in Fairmont WV on July 8, 1926. The oldest of eight children, Christine played a dominant role as a loving mentor to her brothers. Shortly after her mothers’ death her father Clyde remarried Alice Garlow and she became Grandma to all of the Grand and Great-Grandchildren. Christine was blessed with a large and loving family. She married her best friend, the late Lester E Van Gilder on December 9, 1943. Her mother died when Christine was 21 years old shortly after the birth of their first child, Patricia. After her mother died the role of Sister became even more significant in the lives of her brothers. A very close bond became even tighter as there was little distinction between the two families during her early years of marriage. Together Christine and Lester raised their six children with love, discipline, charity and humility. As a young adult Christine studied the Bible and as her family grew she faithfully followed its teachings and purveyed those lessons to her children by example. From birth Christine dedicated her children to God and encouraged them to explore the beauty of His teachings through reading, study, and by serving others. Christine was an educator at heart. She was generous, kind, considerate and compassionate and always had time to answer questions or help solve problems. She will be dearly missed by her loved ones, who celebrate the fact that she is at peace with her Creator. Christine is survived by her daughters; Patricia (Robert) Levenson, Donna (Paul) Kimbrew, Tammy (Craig) Richards and sons Richard (Iara) and Dennis (Cathy) VanGilder; sixteen grandchildren and seventeen great grandchildren; brothers Marvin (Margie) Vandergrift, Ronnie (Marie) Vandergrift and Larry Vandergrift. She is preceded in death by her husband, parents, son Michael E (Linda) VanGilder, and brothers Richard, Gerald, Donald and Darrell Vandergrift. Friends and family are welcome to call at Carpenter and Ford Funeral Home, 209 Merchant Street, Fairmont, on Monday, September 3, 2018 from 4-6p.m.; a service will begin at 6:00 p.m. at the funeral home with Sr. Pastor Doug Hendrixson officiating. Additionally, there will be a short service Tuesday, September 4th at 11:00 a.m. at Carpenter and Ford Funeral Home preceding the funeral procession to Mt. Zion Cemetery where Christine will be laid to rest. A reception will follow at the Central Church of the Nazarene located at 114 Walnut Avenue, Fairmont. In lieu of flowers the family would appreciate a contribution to the Soup Opera, 425 Quincy Street, Fairmont, WV 26554 or the Alzheimer’s Association, P.O. Box 96011 Washington, D.C. 20090-6011. The family is grateful for the loving care, support, and guidance of the professional staff and volunteers at Brookdale Memory Care and Hospice in Kingsport, Tennessee.

Phyllis Christine &#8220;Chris&#8221; VanGilder, 92, returned to her heavenly home on August 31, 2018 after a valiant struggle with Alzheimer&#8217;s disease. Her devotion to family and very strong belief in God supported her throughout life... View Obituary & Service Information

The family of Phyllis Christine "Chris" VanGilder created this Life Tributes page to make it easy to share your memories.