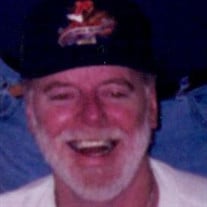 Philip “Mad Dog” Leon Ice, 68, of Barrackville, passed away on Monday, January 13, 2020, at the Cleveland Clinic. He was born on May 07, 1951, in Fairmont, a son of the late James Rex Ice Sr. and Genevieve (Toothman) Ice. After graduating high school, Philip went on to proudly serve his country in the United States Navy. He was a coal miner by trade. He was a member of the TKE Fraternity and VFW Post 7048. He is survived by three brothers: James “Jim” Ice and wife Jeanina, of Fairmont, Dewey Ice and wife Patsy, of Barrackville, and Douglas A. Ice and wife Doreen, of Barrackville; sister-in-law, Janet Ice, of Virginia; as well as several loving nieces and nephews. In addition to his parents, he was preceded in death by brother, John C. Ice Sr.; nephew, Randy Ice Jr.; and niece, Natasha Ice. In lieu of flowers, the family requests that donations be made to The Wounded Warrior Project, PO Box 758517, Topeka, Kansas 66675-8517. Family and friends are welcome to call at Carpenter and Ford Funeral Home, 209 Merchant St., Fairmont, on Thursday from 2 p.m. – 8 p.m. and on Friday, January 17, 2020, from 10 a.m. until the service at 11:00 a.m., at the funeral home, with Pastor Stephanie Bennett officiating. Interment will follow at West Virginia National Cemetery in Pruntytown, with Full Military Honors provided by the United States Navy and the Marion County Veteran’s Council Honor Guard.

The family of Philip Leon Ice created this Life Tributes page to make it easy to share your memories.