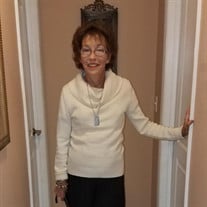 Penny went to be in the arms of her loving Savior on January 20, 2022. She had a very loving and faithful life. She was born September 7, 1951, the daughter of the late Thelma O’Bryan Davis and Norman C. Davis who she loved dearly. Penny was raised on East Side where she still resided until her death. In her younger years she was involved in a lot of church activities and Girl Scouts where she received the highest honor, God and Community Award. She was involved in may church activities. She was an accomplished music person playing piano, accordion, organ, guitar and hand bells. She graduated from East Fairmont High School and Fairmont State College where she majored in music. While at East Fairmont High she was very active; she was the first freshman to be chosen for “All State Chorus”. She was in the very first group of “Honeybees” when they appeared with the band. She also played in the stage band. She appeared in many dramas. She was very active in her first church EUB Methodist (Christ United Methodist Church). She was in the youth group and first received Christ at Church Camp. After being raised in Methodist Church, she moved on to be a proud member of Trinity Assembly of God. There she taught 3rd Grade Sunday School for many years. Penny taught piano lessons at a local music store. She also worked at First National Bank and Foodland. Her life became dark when she lost the love her life after 40 years, Mason Beafore who passed away in 2010. He was a wonderful husband to her and a great father to their two sons, J.B. Beafore and Eric Shuck. He was a proud grandpa to Corey Brandon, and Beckett Jameson (who Mason got to hold 2 times before he died). She loved her family second to God and wanted to be an impact in their lives. Penny never stopped trusting in God through her trials and tribulations. She really loved everyone, and her faith has landed her in heaven! The celebration of eternity has begun. She was very involved in her boy’s and grandson’s activities. She was also very involved with her political affiliations being at one point the chairwoman of the Marion County Republican Executive Committee and also State Executive Woman, having been elected by the patrons of the State/District. Penny was a volunteer for Hope Inc. an organization for battered woman. She loved Jesus and witnessed to his healing power by giving anointed prayer clothes to people all over the country. She loved helping people and never looked at it as a burden but a pleasure! She is survived by her sons, J. B. Beafore and his wife, Chanda; Eric Shuck and his fiancé, Marina Pislan; grandsons, Beckett Jameson and Corey Brandon and his wife, Karen; her sister, Charlene Davis Prescott and her husband Charles Prescott of Tennessee and Florida. Also surviving are several nieces and nephews, including Michelle Nieto, Andrew Prescott and Stephanie Strickland; as well as many cousins. She was also preceded in death by grandparents, Ellen Harrison O’Bryan, Harrison O’Bryan, Andwin Davis, Otis Allen Davis and Gaye Crites Davis. Several aunts and uncles who she adored and a stepsister, Carol Padgett. Her last wish is that anyone who wants and needs to receive Christ, that they do so, now! at her service. Please let me see you on the other side which is “up”. Friends may call at Carpenter and Ford Funeral Home, 209 Merchant Street on Sunday, from 5 p.m. – 7:00 p.m.; and Monday, 1:00 p.m. – 8:00 p.m. Tuesday 10:00 am – 11:00 am. A funeral service will be held at the funeral home, Tuesday, January 25, 2022, at 11:00 am Pastor Skip Vincent, her brother-in-law, Pastor Charles Prescott and Pastor David Meyer officiating. Interment will follow at Grandview Memorial Gardens. Condolences and memories may be shared at www.carpenterandform.

Penny went to be in the arms of her loving Savior on January 20, 2022. She had a very loving and faithful life. She was born September 7, 1951, the daughter of the late Thelma O&#8217;Bryan Davis and Norman C. Davis who she loved dearly. Penny... View Obituary & Service Information

The family of Penny Lee Beafore created this Life Tributes page to make it easy to share your memories.

Penny went to be in the arms of her loving Savior on January...