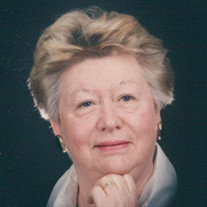 Pearl Mae “Pat” Haney, 94, of Fairmont, passed away at Monongalia General Hospital on Thursday, March 14, 2019. She was born in Nokesville, Virginia on October 6, 1924, a daughter of the late Charles and Emma Hall Houston. She was the oldest of twelve siblings. She had worked at L. Frank & Co. in Washington, DC. In Fairmont, she had worked at Jones Department Store, The Vogue Shop and Springer Appliance Co. Most of all, she was a homemaker, loving wife, mother, grandmother, great grandmother and great-great grandmother. Pat was member of the V.F.W. Post 629 Ladies Auxiliary. She was a member of Central Methodist Church. She enjoyed gardening, reading and traveling. In addition to her parents, she was preceded in death by her husband William Elbert Haney. The couple married on January 5, 1946, at First United Methodist Church. She is survived by her son William E. “Bill” Haney and his wife Barbara of Fairmont; two daughters Brenda Hinkle and her husband Ron, of Fairmont and Sandra Kay Joe and her companion Dennis Christian, of Fairmont; one brother Eugene Houston, of Virginia; seven grandchildren: Ryan Hinkle and his wife Chrystal, Lindsey Clarke, Matthew Hinkle and his companion Angela Lamb, David Joe and his companion Mary Ann Orr, Kristy Sypolt and her husband Greg, Stephanie Warino and her husband Charlie and Liz Urse and her fiancé Donnie Orr; nine great grandchildren Myles Hinkle, Layla Clarke, Addie Urse, Hollin Warino, Hazel Warino, Macy Souhala and her companion Brad Gray, Madison Ott, Liam Little and Cody and his wife Elise Joe; two great-great grandchildren: Malakai and Jackson; and several nieces and nephews. She was also preceded in death by one son-in-law David Joe and ten brothers and sisters. Friends may call at the Carpenter and Ford Funeral Home on Monday from 1 – 8 p.m. and Tuesday from 10 – 11 a.m. Services will be held at the funeral home on Tuesday, March 19, 2019 at 11:00 a.m. with Pastor Larry Buckland officiating. Burial will follow at Mt. Zion Cemetery.

The family of Pearl "Pat" Haney created this Life Tributes page to make it easy to share your memories.

Pearl Mae “Pat” Haney, 94, of Fairmont, passed away at Monongalia...