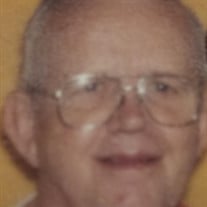 Paul Miles VanHorn, 94, of Fairmont, passed peacefully at home on Sunday, January 27, 2019, surrounded by his loving family. Paul was born on January 23, 1925, in Camden on Gauley, a son of the late David K. and Stacy (Shell) VanHorn. Paul proudly served his country in the U.S. Navy during WWII on the George E. Davis; he worked in the logging industry for a short time, and then devoted 32 years to Westinghouse/North American Philips. Paul enjoyed his family, camping, fishing, and hunting. He was involved in the Lions Club for many years, traveling all over the state with the Mobile Sight Unit. Paul is survived by his daughter, Evelyn Carson (Jeff), formerly of Huntington; granddaughter, Alisha Brumfield (Church), of Huntington; great-grandchildren: Joselyn May, of Huntington, Patricia Curry (Stephen), of Fairmont, and Bryan Adams, of Huntington; three great-great grandchildren, Patrick, Laykin, and Dreama, of Fairmont, as well as many loving nieces and nephews. In addition to his parents, he was preceded in death by his beloved wife of 69 years, Edith (Riddle) VanHorn; son, Paul Wayne VanHorn; two brothers: Harold and Guy, and four sisters: Lila, Pauline (his twin), Lois, and Mabel. The family would like to thank the nurses at Amedysis Hospice, and Ashley Fultineer who stayed by his side to the very end. Family and friends are welcome to call at Carpenter and Ford Funeral Home, 209 Merchant Street, Fairmont, on Tuesday from 4 p.m. – 8 p.m., and on Wednesday from 11 a.m. - 1 p.m., with services starting 1:00 p.m. on Wednesday, January 30, 2019, at the funeral home with Pastor Bill Stutler officiating. Interment will follow at Grandview Memorial Gardens with Full Military Honors provided by the United States Navy and the Marion County Veterans Council Honor Guard.

Paul Miles VanHorn, 94, of Fairmont, passed peacefully at home on Sunday, January 27, 2019, surrounded by his loving family. Paul was born on January 23, 1925, in Camden on Gauley, a son of the late David K. and Stacy (Shell) VanHorn. Paul... View Obituary & Service Information

The family of Paul Miles VanHorn created this Life Tributes page to make it easy to share your memories.