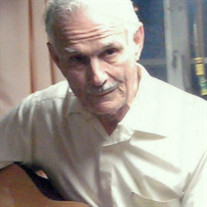 Paul Buege, 92, of Fairmont, passed on Sunday, March 10, 2019, at West Virginia Veterans Nursing Facility in Clarksburg. He was born on May 06, 1926, in Fairmont, the son of the late Phillip Felix and Della Christopher Buege. He was lifelong devout member of Eastside Church of Christ. He proudly served his country in United States Army in the Infantry as a Corporal and was stationed mostly in the Caribbean at the Panama Canal. Paul loved to sing. He sang often at Sagebrush Roundup and any other place that would allow him on stage. He was a member of the Songbirds singing group that frequented local nursing home in Fairmont area. He loved his God, his family, and his friends. Paul drove truck for the Independent Dress Beef Company on Stony Road, and then worked at a mine in Kingmont for the Virginia & Pittsburgh Coal Company. He, along with his lifetime friend Hiram Satterfield, were among the first hires of West Virginia Electric. He was a 40 year worker for IBEW. He also worked for Cerro and Alcan Aluminum. Paul founded Buege’s Auto Electric in 1966 which became Buege’s Used Cars Sales on Speedway and Elkins Street. In addition to his parents he was preceded in death by his loving wife Helen Lea Buege. The couple were married for 61 years. He is survived by two sons: Phillip Michael “Mike” Buege and Robert Buege, both of Fairmont; one daughter, Arlene Gower, of Ohio; five grandchildren: Tim Barr, Jay Barr, Paula Jo Gower, Jeff Gower, and Holly Buege (Jason) Smith; several great grandchildren; one sister, Minnie Conrad, of Fairmont; and several nieces and nephews. He is also preceded in death by a daughter, Rhonda Lea McCabe, and one grandson Michael Buege; a son-in-law Paul Gower; a brother James Buege; and a sister, Olympia “Mickey” Davis. Friends may call at the Carpenter and Ford Funeral Home, 209 Merchant Street, on Wednesday from 4 – 8 p.m. and Thursday from 10 -11 a.m. Services will be held at the funeral home on Thursday, March 14, 2019 at 11:00 a.m. with Evangelist Jay Stevens officiating. Burial will follow at the West Virginia Nation Cemetery in Grafton. Full Military Honors will be conducted at the cemetery by the Marion County Veterans Council Honor Guard and the United States Army Reserves at Camp Dawson.

Paul Buege, 92, of Fairmont, passed on Sunday, March 10, 2019, at West Virginia Veterans Nursing Facility in Clarksburg. He was born on May 06, 1926, in Fairmont, the son of the late Phillip Felix and Della Christopher Buege. He was... View Obituary & Service Information

The family of Paul Buege created this Life Tributes page to make it easy to share your memories.