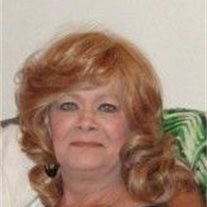 Patricia Morrison Patricia Anne (Williams) Morgan Morrison, 61, of Hoschton, Georgia formerly of Fairmont, passed away Sunday, October 2, 2011 at Grafton City Hospital. She was born in Fairmont on January 30, 1950, daughter of the late Paris Williams and Earlene (Franks) Williams Roderick of Grafton. Patty was a graduate of East Fairmont High School and a former employee of Fairmont General Hospital, but spent most of her life as a homemaker. Her passion was being a loving daughter, wife, mother, grandmother and friend. She was an avid collector and crafter but she especially loved spending time boating on Lake Lanier in Georgia with family and friends. In addition to her mother, she is survived by her daughter Deanna Morgan, son Jeff Morgan and his wife Danielle of California; 5 grandchildren, Angelica Boyce, Trevor Link, Alissa Link, Jake Morgan, Luke Morgan. Also surviving are her close friend and companion, Ron Allen of Georgia; three brothers, Dennis Williams of Fairmont, Roy Williams and his wife Joyce of Fairmont and Jack Williams and his wife Millie of Morgantown; several nieces and nephews and close friends, Junior and Cindy Harrison and family of Georgia. In addition to her father, she was preceded in death by her first husband and father of her children Randy Morgan and second husband Thomas Morrison in February of 2008. In keeping with the wishes of the deceased, her body has been cremated. Friends may call at Carpenter and Ford Funeral Home, 209 Merchant St., Fairmont on Friday, October 7, 2011 from 12-2 pm. A memorial service will be held at 2 pm in the funeral home with Rev. Orville Wright officiating. Interment will be at Mt. Zion Cemetery. In lieu of flowers, the family requests donations be made in her memory to the American Heart Association, 350 Capital St., Room 206, Charleston, WV 25301-3715. Online condolences may be left for the family at www.carpenterandford.com

The family of Patricia Anne Morrison created this Life Tributes page to make it easy to share your memories.