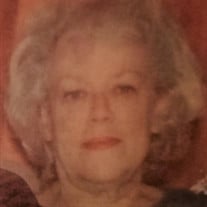 Patricia “Patty” Kay Biafore, 75, of Fairmont, passed away at J.W. Ruby Memorial Hospital on September 23, 2018. She was born on January 24, 1943 in Fairmont, the daughter of the late James Watkins and Rebecca West Watkins. Patty graduated from East Fairmont High School in 1960, and later went on to marry the love of her life, Daniel “Danny” Biafore, her husband of 58 years. 21 years ago, Danny gave Patty the ultimate gift of love by donating her a kidney. Patty will be remembered as a loving wife, mother, and grandmother. She was the light of her family’s life, their rock and boss, and truly an amazing woman. She will be greatly missed by everyone who knew her. In addition to her husband, Patty is survived by two loving daughters, Tammy R. Watt and husband, Bill, of Waynesburg, and Rebecca Rose Pavelko, of Fairmont. She is also survived by brother, James Watkins Jr., of Fairmont, and four grandchildren: Justin Watt and Brianna Watt, both of Waynesburg, and Alexandria Marie Pavelko and Brandyn Robert Daniel Pavelko, both of Fairmont. Family and friends are welcome to call at Carpenter and Ford Funeral Home, 209 Merchant Street, Fairmont, on Wednesday, September 26, 2018 from 2 p.m. – 9 p.m. and Thursday, September 27 from 10 a.m. – 11 a.m., with services taking place at the funeral home at 11:00 a.m. with Pastor Ray Crabtree officiating. Interment will follow at Grandview Memorial Gardens.

The family of Patricia "Patty" Kay Biafore created this Life Tributes page to make it easy to share your memories.

Patricia “Patty” Kay Biafore, 75, of Fairmont, passed away at...